What’s So Bad About Globalism? 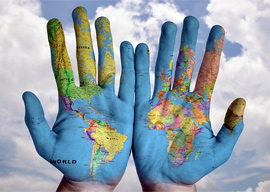 As far as I can tell, globalism is a scheme concocted by the rich to destroy the working and middle classes through worldwide financial imperialism.

I have a strong hunch that globalism is also a plot hatched to obliterate indigenous cultures and real human differences under the deceptive ruses of “multiculturalism” and “diversity.”

This is why I’m confused whenever I hear someone say they hate “the rich,” oppose “imperialism,” and support “the working class” while being an unquestioning cheerleader for open borders and global government.

Like Marxism’s pipe dreams about an eventual and irreversible dictatorship of the proletariat, the most seductive hook about globalism is the idea that it’s inevitable. Technology has made us an increasingly interconnected planet, and therefore the only logical and moral thing to do is establish a benevolent global governmental authority with the power to tax and imprison and torture and abuse.

But communism proved to be far from inevitable. After peaking last century, it has retreated from much of the globe. I”d like to think the same is true about the one-world-government schemes that underpin what is cheerily referred to as “globalism.”

“Globalism will only replace wars between nations with wars within former nations.”

Those who”ve lived most of their lives with a sad and simple choice between working and starving can feel the disdain that the sneering global elites have not only for them personally, but for their culture and their humanity and their very existence.

Whatever jobs these wealth-crazed control freaks couldn”t pack into wooden crates and send overseas, they are more than happy to undercut wages here by importing “migrants” both legal and illegal who have nothing in common with you culturally and are trained to deride you as an evolutionary throwback if you dare to complain that the elites are laughing in your face as they pull the rug out from under you.

Globalism replaces First World workers with Third World workers and calls them “racists””the modern equivalent of “niggers””if they dare to make a peep about it. While it may be a boon for transnational financiers and manual laborers in Malaysia, for workers throughout the West, globalism has been a trapdoor through which they are likely to hang swinging at any moment. For the Western working class, globalism has meant retreat and defeat and dislocation.

The globalists gutted the American working class and created a middle class in Asia. The issue now is about Americans looking to not get fucked over.

But as many of us are learning, the mere act of realizing you”re being fucked over”much less trying to stop it from happening”automatically makes you a Nazi and an anti-Semite and a white supremacist and a toothless, low-information rube who needs to be replaced on the assembly line by someone with more melanin and less money.

As the world’s financial elites grow more rootless and international, they no longer even pretend to find a common bond with the peasants and the pissants in the countries who host them. Instead, they openly deride them.

But to the horror and dismay of the ultra-arrogant cosmopolites, the rural rubes in flyover country are waking up to the fact that at the very best, they are viewed as obstacles to progress. At the very worst, they sense that the global planners would have no problem bulldozing straight over their corpses in order to pave the way for such “progress.”