What’s the Matter With Blackface? 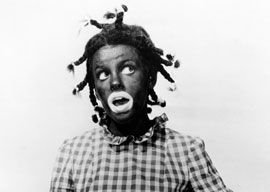 Last week, some rich guy at a party in Vienna may have grabbed Kim Kardashian’s ass and someone may have approached her wearing blackface. So? She got $500,000 to be the host’s guest and her entire career is based on the fact that she has a ginormous ass. What did she think was going to happen? As far as the blackface goes, what’s the matter with blackface?

Answers to this question seem to range from “Seriously?” to “Wow…just wow.” I’m from Canada, where it’s all about French v. English, so I can approach such sacrosanct racial taboos with total ambivalence. “If it’s so wrong, you should be able to explain why,” I tell people, to which the response is usually, “Aren’t you Canadian?”

All week I’ve been asking Americans to explain exactly why blackface and minstrel shows are verboten. I’m not for or against such things per se, but I think we should be able to articulate why such rules exist. If you told me that two plus two equals five or rape should be legal, I could succinctly tell you why you’re wrong. Blackface appears to be inexplicably evil. I’d say well over half the answers were not answers at all and included questions such as, “Why would you want to?” and “Don’t you have empathy?” Here are the only 15 reasons I could squeeze out of the entire country.

1. THE TERM “JIM CROW” COMES FROM A MINSTREL SONG
So? The term “dunce” comes from John Duns Scotus, one of history’s greatest scholars. The only thing that name tells us is that many saw “Jim Crow” as another word for “Negro.” Besides, the original lyrics to that song were anti-slavery and included these lines:

I’m for freedom
An for Union altogether
Although I’m a black man
De white is call’d my broder.

“Lots of things hurt people, but creating rules where you”re not allowed to offend people is to invite tyranny.,”

2. IT WAS ABOUT MOCKING SLAVES
Some of it appears to have been, OK, but the rest was just mimicking black people. It may have gained popularity during slavery, but blackface continued well into the late 1970s with programs such as The Black and White Minstrel Show and is used all over the world. In Europe, where Kardashian’s sensibilities were allegedly assaulted, it has very little to do with slavery and they’ve been doing it for centuries. Much of that continent is unaware that it’s wrong. In Scotland, they still sell golliwog dolls. When I showed an American a golliwog doll, she said, “Are you kidding me right now?” When I asked what exactly is wrong with it, she told me to fuck off.

3. IT PORTRAYED BLACKS AS LAZY AND SHIFTLESS
Again, sometimes it did. When you look at the past 200 years of blackface and minstrel shows, I’d say about 20% may have been negative representations. The rest were just imitations and many of them seem like pretty fun guys to me. Of course they were repeating stereotypes. That’s what imitations do. Theater is theatrical. When Mike Myers lampoons Scottish rage on SNL, he is mocking the Scots’ temper. The English invaded Scotland for hundreds of years. Scottish history is fraught with strife, and that’s why they’re so ornery. But when you mimic this behavior, they don’t cry about it. They laugh.

4. ONCE UPON A TIME, BLACKS WERE ONLY ALLOWED TO PERFORM IN BLACKFACE
So? All theater performers used to be treated like scum. They were ostracized and treated like Gypsies. They had to live on the outskirts of town. Blacks definitely had it the worst in America during slavery, but almost everything sucked back then. Actually, didn’t Indians have it worse? I don’t know. It was 150 years ago. Stop letting it affect everything we do and say today. Maybe the reason slavery is a wound that won’t heal in America is that y’all keep picking the scab.

5. MOCKING SLAVES IS AN UNFAIR TARGET
OK, so let’s take that 20% and assume it involved attacking slaves. Correct. That is an unfair target. That’s called “unfunny,” not evil. Why is it banned in 2014? Why is it that when Fred Armisen is doing a Governor Paterson imitation, he can wear the Afro wig and squint his eyes, but he can’t add a layer of brown makeup? Why can no white comedians do an Obama impersonation? Comedy shows have to bring in a black comedian to do Obama imitations lest they be accused of trivializing slavery. This rule cuts out a huge portion of good bits. How are we supposed to make fun of this guy, for example?

6. WELL, THEY WERE MOCKING SLAVES
Not so fast. A few years ago, Reason ran a brilliant article called “In Defense of Blackface” in which the writers argue that blackface and minstrel shows have to be taken into context to be understood. Back then, whites lived in a world where almost everything they did was wrong in the eyes of the Lord. Blacks, on the other hand, seemed relatively carefree. Blackface was a chance to let loose and have some fun away from the eyes of God.

One of the more rational guys to whom I showed the Reason article said blackface may have been the precursor to jazz and the beatniks and The Rolling Stones. Isn’t that what we’re told rock ‘n’ roll is”whites emulating blacks?

7. AMERICA IS UNIQUE BECAUSE WE HAD SLAVES
Oh, for crying out loud, everyone had slaves. America didn’t invent slavery. They ended it. And they lost more than 600,000 white men doing so. The descendants of slaves in America are a helluva lot better off than 99% of their descendants back home in sub-Saharan Africa.

There were plenty of Irish slaves, too, but they didn’t fare well against the sun. Their horrible past has made them quite drunk and ready to brawl. Why don’t the Irish complain that Notre Dame uses a pugilist Paddy as their mascot? As one American put it, “Because they’re the ‘Fighting Irish,’ not the ‘Whining Irish’.” The Micks lost a million people to the Great Famine, and that wasn’t really about potatoes. It was about English landowners redistributing Irish farmers’ food. Stalin did the same thing to Ukrainians in the Holodomor, where an estimated seven million died. Mao killed tens of millions of Chinese people but for some reason, Hitler and slavery are the only jokes off the books.