What’s Worse: Banning Them or Bombing Them? 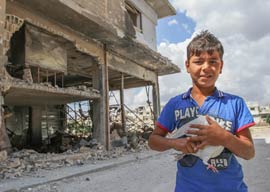 Lawdy, lawdy was there an eruption of sanctimonious gasping and self-righteous snorting and pearl-clutching and face-fanning and catching the vapors last week when Donald Trump proposed a temporary ban of all Muslim immigration to the United States. The highly visible public displays of chest-thumping moral outrage were far more intense and pervasive than anything I witnessed the week before, when a husband-and-wife team of radical Islamists in California went on a shooting rampage that ended up with 14 American bodies being planted in the ground.

Any era in which mere words are considered worse than murder is a dangerous era indeed. The problem seems to be that far too many people are sensing danger in all the wrong places.

The obvious reason why public displays of moral outrage are more about social signaling than they are about morality is the simple fact that most people are far more social than they are ethical.

“Banishing all members of a religion from the country? Why, that’s what HITLER did!” they screeched loudly enough so that everyone within earshot would realize that they are good people.

“Can anyone explain why a temporary immigration ban is far more objectionable than continuing to bomb the shit out of the Middle East?”

Yeah, but Hitler bombed foreign countries, too, and I don”t see you freaking out over the fact that the USA has been bombing the Middle East into prehistoric oblivion for nearly 15 years. I don”t recall even the most strident opponents of US foreign intervention expressing such shock and vitriol about these stupid, bungling, and insanely expensive wars that the US has been waging since shortly after 9/11. The reaction to Trump’s immodest proposal about immigration was a quantum leap beyond anything I”d seen from even the most rabid peaceniks.

Speaking of Hitler”because many people can”t seem to help themselves from speaking of him”our children’s schoolbooks teach that he killed six million Jews, right? According to some estimates, US intervention in the Middle East since 1990 has killed around four million Muslims. I mean, that’s two-thirds of a Holocaust. Shouldn”t that count for something?

Can anyone explain why a temporary immigration ban is far more objectionable than continuing to bomb the shit out of the Middle East?

I posed that question on Twitter, and my favorite response was that you can’t accuse bombs of being Islamophobic. Someone else suggested that indiscriminate bombing doesn’t discriminate. And because the military-industrial complex hates intolerance. Others stated that moral outrage over US foreign policy is muted or silenced because it disrupts the high holy project of “greater Israel” over there and the possibly even holier project of bringing “blood and unrest” here to “assist growth of the SJW [social justice warrior] police state.”

Would there even be a so-called “refugee crisis” if the US hadn’t been routinely bombing the Middle East and raining hellfire over there for so many years?

Why did John McCain’s sick “Bomb Iran” Beach Boys parody not generate nearly the degree of shock and disgust that Trump’s temporary immigration ban idea did?

Hillary Clinton, the emergent Queen Bee of the SJW Police State, wiped Huma Abedin’s Islamic-scented vaginal juices from her lips long enough to declare that Trump’s comments had “crossed that line” and “gone too far.” Trump retorted that Hillary had “killed hundreds of thousands of people with her stupidity” while Secretary of State.

Trump’s proposal has historical precedent”among Democratic presidents, at least. In the late 70s when Middle Eastern countries started turning their backs on Westernization and going full-throttle jihad”pretend it has nothing to do with American support of Israel”Jimmy Carter canceled the visas of Iranian citizens and would-be Iranian immigrants. And then there was FDR’s internment of Japanese citizens during World War II, which are roundly condemned even by Democrats, although they don’t like to talk about that too much because FDR is a hero for expanding the federal bureaucracy well past the point of no return.

The Immigration Act of 1924 explicitly banned all Arabs from entry to the USA. The ban wasn’t lifted until the Immigration and Nationality Act of 1965“the single law that has proved to be the demographic death knell for Americans of European ancestry.