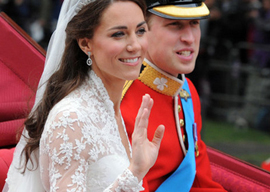 Duke and Duchess of Cambridge

One of the reasons the West is in such deep trouble is that it has allowed “rights” to kill off what’s “right,” as in “that which is right.”

Rights are used to justify a whole series of wrongs, from the declaration of unwise or unjust wars to the condemnation of smokers to a life on the streets.

Rights conflict all the time. Some are more sacred than others, so someone must decide which are more sacred. The case of the Duchess of Cambridge’s topless photographs illustrates this. She has the right to privacy and the press to freedom of expression. Whose right wins?

Your right to this, that, or the other has become sacred, regardless of whether it is right and quite often when it is plain wrong, and regardless of the cost and damage to me.

But the dominant view in the West that rights”nowadays known as “human rights””are each human being’s inherent, universal, and inviolable private property, is nonsense.

Rights did not even exist in Europe before the Renaissance, and they still do not exist in much of the world. What did exist was objective “right” (ius) and “by right” (de iure).

“Rights are used to justify a whole series of wrongs.”

Yet the history of Europe and America, indeed of the entire planet, might have been very different had Franciscan monks of the Order of Friars Minor won their titanic struggle in the 14th century to deny the existence of rights in particular with Pope John XXII who was French and insisted”in the cause not of liberty but of avarice”that rights do exist.

The leader of the rebel friars during much of the struggle in the first half of the century was the scholar Michele da Cesena (Michael from Cesena), named after the pretty little Italian city where he was born.

Much of the drama was played out not in Rome, nor even Italy, but in the south of France at Avignon, where from 1309-1376 the seven popes of the Avignon papacy resided and from 1378-1423 two of numerous antipopes.

The Franciscan order, founded by Saint Francis of Assisi in 1209, lived according to the doctrine of apostolic poverty based on the belief that Christ and the apostles possessed nothing. Franciscan monks could not “possess,” personally or collectively, either property or money. But they “had,” or had “use” of, much property and money nonetheless.

Yet how is it possible to “have” or “use” something but not “possess” it, and what does that word “possess” really mean?

The labyrinthine debate that this question provoked was made more poignant because the Catholic Church had become bloated by immense wealth and riddled with endemic corruption. Many believed that Satan had conquered it in Avignon.

The debate led to the suppression for a time of the Order of Friars Minor and the excommunication and condemnation of many Franciscans as heretics. Some were burned at the stake.

But as a result of this theological investigation into the nature of property by 14th-century Catholic scholars, aided by the recent rediscovery of classical Greek and Roman texts, the first notions of subjective rights as the possessions of individuals emerged.