When Will the Goyim Learn? 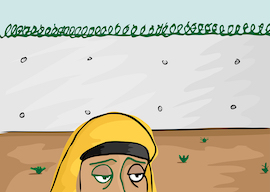 Just as many men still fail to understand that to criticize women or to disagree with them is misogynistic by definition, so many people, even in 2019, still think that one can criticize Israel, or question Jewish influence on U.S. foreign policy, without being anti-Semitic. Some way to treat God’s chosen people! How many Goldberg reviews will it take for the ungrateful goyim to learn?

The latest anti-Semitism controversy was started by Rep. Ilhan Omar. “It’s all about the Benjamins,” the pesky brown woman tweeted on Feb. 10. People were charmed, of course, by the reference to P. Diddy’s celebrated work of high culture, but the implication that U.S. foreign policy on Israel is determined by Jewish lobbyists was proof of Omar’s wickedness.

Then, on March 3, Omar plunged another knife into enlightened hearts. “Our democracy is built on debate….” she tweeted. “I should not be expected to have allegiance/pledge support to a foreign country in order to serve my country in Congress or serve on committee.”

Happily, the good men and women of Congress know better, and accordingly, back on Jan. 3, Sen. Marco Rubio made sure to sponsor a bill that advocates punishing any U.S. company or contractor that boycotts Israel.

Needless to say, there were haters and spoilsports, as there always are when it comes to progress.

“By all means, opponents of boycotting Israel should be heard—but so should their opponents,” wrote Sen. Rand Paul. “Legislation to end boycotts goes against the very principles America was founded upon.”

“It’s absurd,” remarked Sen. Bernie Sanders, “that the first bill during the shutdown is legislation which punishes Americans who exercise their constitutional right to engage in political activity.”

“They forgot what country they represent,” said Michigan Rep. Rashida Tlaiband, who thinks “a refresher on our U.S. Constitution is in order.”

A cynical realist might say that what the Jews and the Palestinians each want is power, and that therefore they have long been committed to destroying each other. The billions the U.S. gives Israel every year, he might add, has less to do with concern for the Israelis, human rights, or any other lofty thing, than with keeping wealthy political donors happy and maintaining power over geopolitical rivals and threats in the Middle East.

These are complicated subjects, but luckily, contra Ilhan Omar, they need not be debated. We can simply look to David Marcus of The Federalist for a model of how to deal with the situation. Regarding Omar’s claim that “Jews are using their money to buy off the American government’s support of Israel,” Marcus writes:

This claim is absurd on its face and makes reference to centuries-old claims that greedy Jews are subverting decent society with their big bags of shekels.

“Blind allegiance to Israel will soon be required of all American citizens.”

The second claim is that American Jews who support Israel are engaged in dual loyalty. That their real allegiance is not to the United States but to Israel and Judaism. This is also an ancient and disquieting claim, one that Nazis used to great effect in convincing Germans that Jews weren’t really on their side.

Neither of these vicious and pernicious claims has the slightest thing to do with actual American policy towards Israel—a subject on which Omar and Ocasio-Cortez are oddly quiet, for all their cackling about Jewish influence. Rather, they are blatant attacks on Jews that claim they are not acting in good faith.

Marcus, you see, doesn’t make a substantive argument. He merely tells us that Omar’s claim is “absurd on its face” and references evil stereotypes about Jews. Strung-together assertions, emotionally charged historical references, criticism reduced to racist attack—this is real journalism, not to mention a fine example for our politicians.

Also admirable is Marcus’ acute awareness that truth is determined by group identity:

As bad as the anti-Semitism itself is, arguably worse is that they are telling Jews that it isn’t. They are arrogantly claiming to understand what anti-Semitism is better than Jews do themselves.

Who gets to decide what is anti-Semitic? Who gets to decide what is racist, or sexist? Do the targets of the slurs and attacks get any say in this? If a black person tells a white person she said something racist and hurtful, is it appropriate to say, “That’s just a metaphor, and by the way my broader point is correct?” It obviously is not, and that’s something that Omar and AOC would undoubtedly agree with.

Marcus has a habit of using that word “obviously,” and of making assertions about what things are prima facie. A generous man, Marcus spares readers the hard work of thinking, even as he affirms the intersectional insight that intent, context, and objectivity are all irrelevant. For again, truth is determined by our subjective, emotional responses to things. Thus, a person who wants to ask, “Why is it that Congress wouldn’t spend $4 billion for a wall to stop the invasion of our southern border, but voted to give $40 billion to Israel over ten years?” must realize that “they are arrogantly claiming to understand what anti-Semitism is better than Jews do themselves.”

Writing in The American Conservative, Kelley Beaucar Vlahos notes that

Rubio’s is the weakest of all the proposed anti-boycott bills to come down the congressional pike…in that it merely gives cover to state and local governments that want to punish entities that engage in the anti-Israel protest…. 26 states now have measures that require them to deny contracts to and divest from any companies that are involved in BDS.

That only about half the Union sees fit to subordinate the Constitution to Israel is evidence that America is far from being made great again. Get to work, Javarnka!

In better news, senators Ben Cardin and Rob Portman have provided the best pro-Israel legislation to date. In Vlahos’ words:

Their proposal targets individuals, not just companies, so it could be much more dangerous. They even tried, unsuccessfully, to sneak it into the package of spending bills aiming to avoid the shutdown in December. The Israel Anti-Boycott Act focuses on expanding the 1979 Export Administration Act to prohibit any U.S. person involved in “interstate or foreign commerce” from engaging in “any boycott fostered or imposed by any international governmental organization against Israel.”

The bill suggests that a non-binding 2016 United Nations Human Rights Council resolution supporting BDS stands in for the offending “international governmental organization.” From there it wouldn’t be difficult to see how this law could affect anyone remotely involved in the boycott. An earlier iteration involved prison time for violators. The sponsors have since softened it with an amendment, taking away jail time but imposing financial fines. But adding that nothing in their bill “shall be construed to diminish or infringe upon any right protected under the First Amendment,” doesn’t necessarily make it so.

Of course, one must make allowance for Ms. Vlahos’ deplorable bias; that is, her concern for American liberties and interests.

Human resources departments across the land now require employees to pledge their faith in equality, diversity, and other impassioned delusions. In just the same way, let’s hope, blind allegiance to Israel will soon be required of all American citizens. Nor is reading John Podhoretz, or “prison time,” too harsh a penalty for heretics.

On Wednesday, Speaker Pelosi met with Democrat Representatives behind closed doors. It’s difficult to believe, given the overwhelming presence of the fair sex, that the ostensibly strategic meeting quickly degenerated into a complaint session, and yet that is apparently what happened. Although black women are well-known for their temperance and gentleness, it’s said that a few were downright confrontational with poor Pelosi.

Typical was Rep. Ayanna Pressley, who emphasized the need for “equity in our outrage,” a conviction she drove home seconds later with her trademark resting bitter face.

“Islamophobia needs to be included” in the anti-Semitism resolution, she told some sycophants working as reporters later, adding, with her knack for cliché, “We need to denounce all forms of hate. There is no hierarchy of hurt.”

Indeed, for since Omar is a Muslim, it follows that the criticism she received was motivated by Islamophobia. Nor did it go unnoticed that Omar has dark skin, being from Somalia, and that she is therefore a victim of racism, too.

Things seemed to be getting quite out of hand, as if the identity-politics Democrats were sleeping on a volcano, when Rep. Cedric Richmond offered his two cents. Why, he asked, were they calling for a resolution against bigotry when there were more important matters to attend to, such as the treatment of young black men by the police?

Still, it was a sympathetic point, as the only way to end the school-to-prison pipeline is to stop making young black men accountable for their singularly violent actions.

In an interview after the meeting, Rep. Raúl Grijalva said of all the controversy concerning Omar, “What would be the appropriate level of punishment—a public flogging?” Ah, if only all goyim were so forward-thinking!

“It is shameful that House Democrats won’t take a stronger stand against Anti-Semitism in their conference,” tweeted Prostitute-in-Chief Donald Trump. “Anti-Semitism has fueled atrocities throughout history and it’s inconceivable they will not act to condemn it!”

Anyway, on Thursday the House of Representatives managed to pass a resolution that condemns anti-Semitism while being as inclusive of other groups’ sacrosanct resentments as possible. The highlight of the resolution is that it describes the many evils caused by “white supremacists,” but does not mention white people as victims of discrimination, save for “when the loyalty of President John F. Kennedy was questioned because of his Catholic faith.”