When You Can’t Hold Your Horses 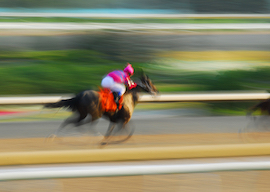 DALLAS—Millions of two-dollar bettors became experts on the rules of horse racing over the weekend after Maximum Security, a handsome bay colt with a white stripe down the middle of his forehead, won the Kentucky Derby, then was disqualified for interference with three other horses on the final turn.

Most of the comments amounted to versions of “We wuz robbed,” since Country House—the horse awarded the victory—had gone off at 65–1 while Maximum Security was one of the three or four favorites.

“The track was in horrible condition! He shied away from that mud puddle!”

“There were drunk rowdy college students on the infield and they spooked him!”

“It was the ridiculous greed of the Churchill Downs owners that allowed 20 horses to be jostling for position on that muddy track!”

Unfortunately, all of the above could be true and it would still be a foul. Horse racing is based on the fiction that an 85-pound jockey—in this case, Luis Saez of Panama—can totally control an 1,100-pound animal so high-strung and inbred that he’s the equivalent of a steroidal maniac.

I once saw a thoroughbred at Belmont Park kick a groomer so hard in the chest that his head cracked open when it hit the side of the stall, and when they got him to the hospital, X-rays showed a rib cage that had basically been shattered. And this was a guy who knew how to walk behind a horse.

I myself have stood in a stall at the old Spendthrift Farms in Lexington holding the tail of a mare who had a veterinarian’s arm in her vagina up to the vet’s shoulder—we were checking her to see if she was ready to breed—and at some point he touched something down there that caused her to rare back like the opening credits of the Fury TV show and crowd me into a corner where it was exceedingly difficult to breathe. If she had fallen backward or a little to the left, someone else would be writing this column.

Thoroughbred racehorses are gonna do whatever they wanna do. Calming them down, “steadying” them, making them comfortable, curing their daily physical ailments—all of these are art forms that require 24-hour attention right up until the moment the jockey climbs aboard and becomes responsible for making the animal run around the track in a competitive but orderly manner. It’s like training a rabbit to hop on cue—theoretically possible but so unlikely that doing it can make you famous.

“Thoroughbred racehorses are gonna do whatever they wanna do.”

I used to sit in the film room at Aqueduct racetrack on the days the jockeys would come up for disciplinary hearings. The film would roll, the foul would be explained by the steward, they would back it up, watch it again, and then the yelling would begin. It was almost always in Spanish, since 90 percent of the jockeys were from Latin America, so I wasn’t sure exactly what they were saying, but you could tell from the animated arguing that it was never their fault. I saw a guy get set down for sixty days for slapping another jockey across the face with his riding crop, and his argument was basically “Who would do that? Nobody in his right mind would do that on purpose.” The implication was that his horse had made such a weird motion that he couldn’t control the arm holding the crop.

And the only reason you could make that argument in the first place is that everyone in the room would accept the premise that a horse can do weird things. The sport of thoroughbred horse racing has so many cameras operating from so many angles that it’s virtually impossible for any action by a jockey or a horse to go unnoticed on a slow-motion playback. And because most thoroughbreds are nervous, like, all the time, they’re expected to do the unexpected. If Maximum Security is that jumpy, I’m surprised they didn’t have blinders on him. But the evidence of this one event is undisputed: For whatever reason, Luis Saez lost control of the horse and he veered wide into the paths of the others. If he had taken just a single lane, I think the stewards would have let it ride, especially in such a big race. But he took up so much space that three horses had to pull up. Admittedly only one of the three had a ghost’s chance in winning, but again, there’s the fiction that Luis Saez was in control.

I can hear Luis at the disciplinary hearing now: “Who would do that? Who in his right mind would veer that wide when leading the race?”

On the way back to his stable at Monmouth Park, N.J., Maximum Security lost a shoe, and once he got there the vet documented abrasions on the backs of his hind legs. His owners are now using this as evidence that War of Will, the horse directly behind him on the final turn, kicked him and forced him to veer wide. If true, it won’t matter. The stewards can’t be overruled. The camera shows what the camera shows. And any argument involving cause and effect is moot anyway, because all the arguments are based on the idea that tiny bulimic men who spend their mornings losing weight by regurgitating raw egg milkshakes can determine what a psychotic inbred steed will do while running at 40 miles per hour and wondering why other horses seem to be crowding around him. It’s horse racing. It’s insane. It always has been.

If you need any further evidence of what we’re dealing with here, five months ago Maximum Security was entered in a claiming race at Gulfstream Park in Florida. This means that anyone could have placed $16,000 in an envelope at the beginning of the race and ended up owning him at the race’s conclusion. (He won by nine and a half lengths.) That’s how well his owners—the people who knew him best—could predict his future behavior. That’s why betting on horse races is legal—because no one can ever possibly know what any of the horses will do in advance.