When Being a Rebel Was Hard Work 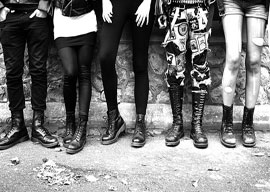 When I was a kid, being a rebel was hard work. You didn”t have the Internet spoon-feeding you the latest trends. You had to dig under rocks to find out what was happening. If you didn”t find a “scene,” you had to make your own.

Back in the 1980s, minimum wage was still under $5. You”d be lucky to save $20 by the weekend, and the only stores that had punk records were an hour’s bus ride away. Imports cost about $15. We didn”t have listening stations back then so we”d have to judge a book by its cover and hope the skull and crossbones artwork didn”t mean the music inside was Goth or industrial. If you screwed up, you”d have to wait seven days before you could try again. I blew countless weekends accidentally buying industrial garbage such as Skinny Puppy, Meat Beat Manifesto, Scraping Foetus off the Wheel, and Alien Sex Fiend.

Going to shows also meant trekking downtown and because nobody had a car, you were left with no choice but to take the brutally slow public transportation system. On Sunday nights it wasn”t unusual to spend a couple of hours trying to get back home from a show. If you missed the last bus, you”d have to walk. Thanks to government incompetence, walking wasn”t much worse than public transportation.

“The only good thing about the good old days was that we had to work.”

Stores didn”t sell punk gear back then. You might be able to find sunglasses or jeans you could rip, but real things such as blue hair dye and Dr. Martens boots had to be imported via Shelly’s catalog. The English have weird foot sizes so you”d inevitably get a size too small, which meant waiting another month for a return or turning your feet into a Steve Martin routine.

I had the advantage of taking regular trips back to Scotland to visit relatives where I could buy “Docs” that fit, but the skinhead movement was so big back then, they “rolled me” for them as soon as I got back home. I still can”t believe that a brand of footwear led to so much violence in the sleepy government town of Ottawa, Canada.

I”d also bring back Manic Panic hair dye where we”d make our mohawks purple or green after stripping them white with L”Oreal Blondissima procured from the local drug store. No matter your subculture, being different back then took at least a year of trial and error.

Getting a tattoo meant finding a biker in a basement who was willing to waste his time on some adolescent fag who kept almost puking. While I was getting my first tattoo in 1988, a guy named Blue kept yelling at his wife for allowing us in his shop and telling me, “I love the new breed of man that’s getting a tattoo these days” when I told him I felt like throwing up. Charlie Corwin, the producer of reality tattoo shows such as Miami Ink recently told me, “Tattoos used to mean, “get away from me.” Now they mean, “Ask me about my tattoo.”” In New York, tattoos were illegal until 1997 and if you wanted one done you”d have to take the train for over an hour to some weird rural suburb in the middle of nowhere. A guy who goes by the name of “Civ” and works at Lotus Tattoo in Sayville, NY says the good thing about this is you end up being pretty sure you have the right idea when you finally make it out there.

When we had an idea we wanted to convey to our peers, we”d go to the local photocopy shop and put together a fanzine. You had to get your hands on an extra-long stapler so the arm could make it all the way to the binding and you had to hammer the staples into a pizza box because they”d get bent on a hard surface. If someone objected to what you put in your zine, they”d put a letter in the mail, which you would receive in your PO box a week later. Then you”d respond in your next zine a month after that. It took years to have an argument and all points were well thought-out, though you couldn”t provide links to back up your point.