When Black Liberals Attack (Each Other) 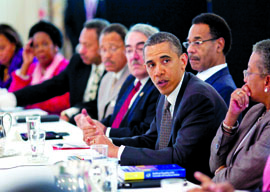 The Congressional Black Caucus found out that if you’re gonna cuss the boss, first you’d better saddle your horse. They threw Obama a campaign party and Obama made it a roast…of the CBC!

Obama saw his window of opportunity and threw a brick through it. Sounding like a black Southern Baptist minister, Obama lectured the CBC, essentially calling them a bunch of bellyaching babies, when he said:

It is clear that Obama expects blind faith from black liberals. There will be no defections. E’rybo’y must press on.

Obama took his shellacking in 2010, while the CBC came out unscathed. The CBC retained all their Congressional seats. Next Obama lost the NY-9 Congressional seat that had been held by Democrats for 88 years. In both cases Obama was left twisting alone in the wind. That’s what elections are for.

“Obama saw his window of opportunity and threw a brick through it.”

While Obama was reviving the new and improved strategy of “Spend Our Way Out of Debt II,” CBC Chairman Emanuel Cleaver (D-MO) offered only token love, saying that if Obama were not black, the Congressional Black Caucus would have “marched on the White House.”

The CBC is about as handy as a golf club in a tennis match, which is why they expected Obama to create jobs for black people, to pay black people’s bills, and to redistribute the wealth to black people, for goodness’ sake. Obama proved useless toward these ends.

In an article titled “The Paradox of Hope,” Gary Younge speaks on Obama’s impact on blacks since his election:

But for all the ways black America has felt better about itself and looked better to others, it has not actually fared better. In fact, it has been doing worse. The economic gap between black and white has grown since Obama took power. Under his tenure black unemployment, poverty, and foreclosures are at their highest levels for at least a decade.