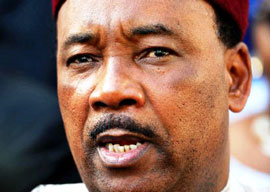 Recently I read an interview with the President of Niger, the francophone country to the north of Nigeria, about Boko Haram, the Islamist group that kidnapped more than 200 Nigerian girls and threatened to sell them into some kind of slavery. President Mahamadou Issoufou said, by way of explanation, that “poverty is the principal ally of terrorism.”

Is this really so? There are plenty of very poor places in the world that are free from terrorism, so poverty is not a sufficient condition for it; whether poverty is a necessary condition depends on the definition of poverty that you use, relative or absolute, bearing in mind that one is always poor relative to someone else unless one happens to be the richest person in the world. Besides, the President named a few other possible allies of terrorism (by which I think he meant causes or necessary conditions) that might be just as important.

For example, he mentioned that Islamic “charitable” non-governmental organizations might be funding Boko Haram. He offered no proof, but it struck him (as it strikes me) as likely. Boko Haram’s arms came from Libya, he said, after the Western overthrow of Colonel Gaddafi; the arms, alas, were liberated with considerably more success than the country as a whole. Therefore Boko Haram might even be called Gaddafi’s revenge (or rather, one of his revenges, the other being the war in Mali). Western policy, then, was terrorism’s ally; unwittingly, perhaps, though not therefore unpredictably.

“No group is more dangerous than the disgruntled literate, and if jobs cannot be invented for them, some of them will invent jobs of their own, among them saving the world by means of an idiotic general idea.”

The President also said, “The majority of the recruits [to Boko Haram] are young unemployed dÃ©classÃ©s. This group has begun to implant itself in the villages. The first leaders, who were townsmen, had launched an appeal for a return to the land …”

This strikes me as a typical example in the Third World of what happens when an educated class is enlarged at a faster rate than that at which the economy can employ it at the level of importance and remuneration to which it believes itself entitled by virtue of its education, that is to say the level at which the educated of former times were employed when they were very much less numerous and therefore a genuine, though no doubt corrupt, elite. This is all the more so when the education has been bought at the cost of considerable personal or parental sacrifice, as it usually has been. By the way, no real peasant would ever call for a return to the land: only an educated or semi-educated townsman, with little experience of the toil of unmechanized husbandry, would do that. Peasants can manage a jacquerie, perhaps, but not a guerrilla movement. The latter requires semi-education at the least, and usually more than that.

Many governments, not just those of undeveloped countries, have made the mistake of thinking that if rich societies are educated, educated societies must be rich, and the more educated they are the richer they will be. They have therefore expanded, more or less by fiat, the numbers of the educated in advance of the expansion of the economy in the hope that the latter will follow, as the night the day.

This is a kind of magical thinking. Another manifestation of such thinking in the Third World is a fondness for skyscrapers even where the electric supply is unreliable and where, therefore, no less suitable style of architecture could be imagined. If skyscrapers are modern, modernity is skyscrapers; and therefore if we in a backward society build some or enough of them, we shall have caught up.

Governments like expanding the numbers of the educated because it is the kind of goal they can set themselves and are more or less certain of reaching. All you have to do is pass a law saying children must attend school for such and such a length of time, and in the case of tertiary education, to lower standards of entry to university and of graduation therefrom. Furthermore, governments can present the expanded numbers as a triumph of their own policy and evidence of their own benevolence, for everyone knows that, if education is a good thing, the more of it the better.

That this results in a bad fit between the education that the young receive and what they will be called upon to do in adult life concerns governments far less. When graduates, however, discover that they will be lucky if they can get an ill-paying job that they would have been able to do by the age of sixteen at the latest, they are likely to be disillusioned and angry; they will feel that they have been deprived of something that they were promised. No group is more dangerous than the disgruntled literate, and if jobs cannot be invented for them, some of them will invent jobs of their own, among them saving the world by means of an idiotic general idea. What in youth is called idealism is more often resentment.