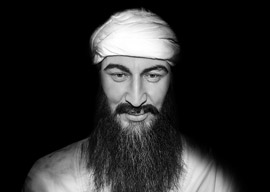 Things have never been grimmer. Wall Street wolves have become billionaires while rigging the system, rats like William Kristol are showboating on television and spreading lies about The Donald, and the most dishonest couple since Bonnie and Clyde are getting themselves ready to reinhabit the White House.

In times such as these, there is only one thing to do: lighten up, and then some. I remember it as if it were yesterday. It was the late “90s”my friend John O’sullivan was visiting me from New York, and we were sitting on my Swiss lawn admiring the Alps while sipping some good white wine. Osama bin Laden was already at that time the world’s most hunted man. So John and I concocted a scenario for my next Spectator column, one that was going to have some pretty strange consequences for yours truly for some years to come. Let’s take it from the top:

As I wrote that evening after three bottles of white, Osama had gone to school in Switzerland, at the famed Rosey School, the school of kings, as it was then known because lots of royals from Europe had attended. His schoolmates had called him Harry Laden, and he had been quite popular because of his predilection for buying drinks for everyone at the very expensive Palace Hotel in Gstaad, where the school has its winter campus. (In the spring and autumn the campus is down by Lake Geneva.) Harry kept a large suite at the Palace, known as the Kandahar Suite, and entertained lavishly every weekend. He was also on the Rosey ski team, one that included Gianni Agnelli, John Taki Theodoracopulos (my son), Jean-Claude Killy, and Edsel Ford. The team was undefeated for three straight years.

“The best way to treat evil is to make fun of it.”

After graduation Harry Laden disappeared for a while, but surfaced at London’s White’s club, a prominent St. James’s gentleman’s club, where he quickly became one of the most popular members because of his generous habit of buying everyone drinks at the bar and even lunch and dinner at the premises. Harry dressed at Anderson & Sheppard, London’s best tailor, and had his bournouze shirts made at the same premises. He wore his native dress at White’s and also during racing at Ascot. The Queen herself had invited him to her box.

This, then, is what I wrote in my Spectator column, adding that the Duke of Beaufort (a very old friend) had proposed Harry as a member of White’s club. Once The Spectator was out, I waited for some reaction, but nothing happened. Then the you-know-what hit the fan. A Daily Mail gossip columnist rang up White’s and asked for Harry Laden. The hall porter, no fool, answered that Mister Laden had not been around recently, a standard answer given to all journalists inquiring about real or imagined club members. Vanity Fair magazine assigned their top two journalists to fly over to London and interview me about Harry’s whereabouts. The editor, Graydon Carter, is a friend, but I kept schtum. Mind you, I was getting nervous, especially when a Palm Beach hostess cut me at a dinner announcing that she would not speak to people who were friends with enemies of the republic.

It soon got worse. While making up the story about White’s, I had added a detail about who had seconded Laden as a member. It was David Metcalfe, an old friend and son of Edward VIII’s private secretary. Metcalfe, no longer with us, was married to an American lady who convinced him that his insurance business would be devastated if and when it got out that he had helped Osama bin Laden become a member of his club. Metcalfe rang me up, demanded a retraction, and then initiated a lawsuit.

My editor at The Spectator just kept laughing it all off, telling all and sundry that “I cannot interfere with the choice of Taki’s friends,” or words to that effect. The hacks Vanity Fair had sent over were after me, demanding an explanation, one I refused to give. “My friends are my friends,” is all I said to them. The Duke of Beaufort, in on the joke, stood by me. “He’s a hell of a fellow,” is how he described Harry, “and quite generous.”

My story’s veracity was finally challenged by one Alexander Cockburn, member of a distinguished British family of journalists, writing a blog out of northwestern America. Cockburn, no fool, fell for the story, but caught me out on the Rosey ski team. The ages of the skiers didn”t make sense. Agnelli was in his late 70s, Killy was in his late 50s, John Taki was 16, Edsel Ford late 50s, and Harry’s age was unknown. (None of the above, needless to say, except for my son had gone to the Rosey.) Something fishy here, wrote Cockburn.

It all became unfishy soon thereafter on September 11th. I immediately spilled the beans, but some people remained quite angry. This surprised me. The best way to treat evil is to make fun of it. As the great Ogden Nash said about the awful Karl Marx, “The world would not be in such a snarl, if we had more of Groucho and less of Karl.” Making fun of those bearded animals who slaughter innocents in the name of Allah would make more of a dent against their horror religion than the PC manner we use. In the meantime, when the Navy SEALs finally got to Osama, the man who pulled the trigger addressed him as Harry. You can take my word for it.