When in Doubt, Blame the Teachers 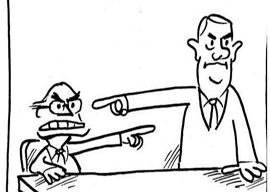 In case you haven’t caught any of the buzz about the movie, or seen Steve Sailer’s review, Waiting for Superman is a 2-hour documentary deploring the state of our public schools, and suggesting ways that public education might be improved.

The movie is framed around five children, four pre-teens and one (I think) just-teen.  The four pre-teens, with their cities and as much of their ethnicity as I could deduce, are: Anthony (Washington, D.C.; African American), Daisy (Los Angeles; Mexican-Hispanic), Francisco (Bronx, New York; Puerto Rican-Hispanic), and Bianca (Harlem, New York; African American).  The just-teen is Emily, a white girl—her mother sounds British—who lives in California.

The selection of kids raises questions right away.  In fact when someone on-screen spoke of the schools “failing our children,” I am sorry to say the old Lone Ranger joke came to mind:  “What do you mean, ‘our’ . . .?”  And really, does anyone think that if the student bodies of the inner-city schools in this movie were to be swapped out en masse for the same number of Koreans, we would be talking about how the schools are “failing our children”?  Untold thousands of East Asian students have in fact passed through our inner-city slum schools on their way—those who survived—to universities and professions.

The filmmakers seem to have been uneasily aware of this issue.  Hence the inclusion of Emily Jones, the white just-teen with a British Mum.  Emily lives in an upscale suburb of San Francisco—house prices run around a million, the narrator tells us (an underestimate, if anything) —but even here the local public high school is “failing our children,” with only 62 percent of freshmen making it to graduation.  Emily enters the lottery for a place at Summit Prep, a nearby charter school.

It’s easy to figure why the filmmakers wanted a token white kid in their movie, but looking up some of the background data, one has to suspect there’s more going on than they tell us.  Emily’s public high school, Woodside High, is 56 percent non-Asian minority (hereinunder “NAM”—black plus Hispanic).  This is, as it happens, precisely the state average for California high schools.  It is noticeably more than Summit Prep, though, which is only 43 percent NAM.  Perhaps more to the point, it is way out of whack for its zip code, which is only 11 percent NAM overall.

Do most of Emily’s friends in this zip code—median household income $96,677—attend private schools, schools her parents object to on ideological principle, or cannot afford?  Is this a sore point with Emily?  We are not told. (I should add that the film’s characterization of Woodside High has been disputed by the principal: “We offered for the filmmakers to learn more about Woodside . . . but the filmmakers declined.”)

With the other four kids we are down among the working poor in big-city slums.  (An environment of which, as it happens, I have some experience as a teacher.)  Here, we are told, the schools are really “failing our children” in a big way; although, as Steve noticed in his review, there is a curious lack of specifics in the movie, and the filmmakers did not venture into these schools to show us the machinery of failure at work.  All they offer us by way of explanation is some negative commentary on the teacher unions and their pathologies.

There was nothing there that you can’t find better-documented at much greater length in Peter Brimelow’s 2003 book about the ed-biz unions, The Worm in the Apple.  The unionization of public-sector workers may indeed be the worst idea of the 20th century, after discounting really big candidates like communism, fascism, and body piercing.  I must record, though, that I came out of this movie better-disposed towards America’s public-school teachers than I went in.

Mediocrity is the norm in any line of work, though.  How many accountants, or computer programmers, or dentists, or law professors, or manicurists, or opinion columnists, are really stellar performers?  When I go for a haircut at my local unisex salon, I always ask for the same lady: not because she’s a world-bestriding genius with scissors and comb, but because she’s the best of a mediocre bunch in a place whose prices I don’t mind paying.  Most of life works like that.

If our schools tracked kids in the old way, there might be glaring racial maldistributions in the various tracks, with East Asian and Ashkenazi-Jewish kids monopolizing the topmost tracks, NAMS over-represented in the bottom tracks, and a big bulge of white gentiles in the middle.

Yet the movie tells us that if we can just get rid of bad teachers, and hire in more good ones, the schools will no longer be “failing our children.”  One of the talking heads in the film actually quantifies the promise: “If we could just replace the bottom-performing six percent of teachers with merely average teachers, our schools would attain the same level of success as Finland’s!”  That was one of the few moments in the movie that made me smile.  In fact—I’ll admit it—I laughed out loud.  Finland!

The structure of this movie, along with wellnigh everything else one sees or reads about how America’s schools are “failing our children,” gives away the real concern of our education reformers:  the decades-long, intractable, un-budge-able academic under-performance of NAMs.  Some reason must be found for this, preferably—oh, much preferably!—a reason that involves human agency.  Somebody is making it happen!  But who?  Whom to blame?

A good deal of education theory this past fifty years has been given over to picking a proper target for blame, and a corresponding remedy.  Legal segregation and its legacy were the first suspects, with busing as the remedy:  that didn’t work out well.  Inadequate funding by mean-spirited municipal authorities was next up, with court-ordered extravagance the cure: the Kansas City debacle discredited that line of argument.

Parents then took a share of the blame, followed by that indispensable, all-explanatory phlogiston of the social sciences, “culture.”  Today’s fashion is to blame the teachers; today’s favored remedy is charter schools, notwithstanding the fact that rigorous academic study of the charter-school phenomenon shows no advantage to them overall.  Five years on we’ll have some different culprit—fast-food vendors, perhaps—and some new remedy: compulsory celery?