When Is Cultural Appropriation Inappropriate? 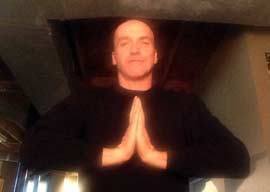 As a humble and dedicated yoga bro in training, my already easily bruised feelings were grievously harmed recently upon learning that what I believed was my benignly tolerant gesture of cultural outreach toward an ancient Eastern physical discipline was instead yet further evidence that I remain a stubbornly pink-skinned pig sloshing around in a swine’s pit of unabashed white supremacy and privilege.

The scales fell from my eyes when I read this article explaining that white people who practice yoga are guilty of cultural appropriation, which, as everyone already knows, is highly inappropriate:

Yoga is created by a non-white culture which is then conquered, occupied, and colonized. Fast forward a few centuries and now rich white people are the “experts”—sanitizing, commodifying, and selling yoga back to other rich white people as self-improvement.

I take great offense to those comments for no other reason than the fact that by no sane definition of the term could I be considered rich.

“If you find it morally imperative to rid the world of this phantom bugaboo that you call ‘cultural appropriation,’ you’ll have to get rid of multiculturalism.”

Whoever hatched this idea of “cultural appropriation””which is, for the love of Pete, what inevitably happens when peoples of different cultures are forced to live in close proximity and a certain overlapping of cultural traditions results”needs to be kicked in the balls. This dizzy notion is predicated on the rather unpleasant and defamatory presumption that white people have no innate culture and are therefore always snatching it from others.

You always hear that white people stole rock ‘n’ roll from blacks, but you never hear the incontrovertible fact that these black rock ‘n’ rollers were playing instruments invented by whites through electronic equipment invented by whites onto vinyl records invented by whites while singing in English, that palest of languages. Any realist whose brain isn’t addled with an emotional agenda would concede that rock ‘n’ roll was a cultural collaboration between white and black Southerners that was subsequently lifted by Northern record executives and, ultimately, the bloody English.

As most blacks would say, what the heck?

Back in college when I suffered the earnest delusion that it was realistic for me to try and identify with the black experience, I remember how All The White Liberals couldn’t shut the frick up about how “white people””a group from which they always conveniently exempted themselves”were “racist” because they didn’t listen to hip-hop. Now the accusation is that they’re “racist” because they listen to hip-hop. After a solid generation of shaming white kids for identifying with anything remotely white, they are now shaming them for identifying with anything remotely black.

Have they no shame?

Our macro-managers want to herd us all together in the same kennel, but they dictate that white people aren’t allowed to act nonwhite because it’s “cultural appropriation,” yet they’re not allowed to act white, either, because it’s a vulgar display of white supremacy, a rancid remnant of a dying civilization that is firmly on the wrong side of history, which is why it’s being extinguished, and not a moment too soon. Am I missing anything in this insanely dictatorial scenario?