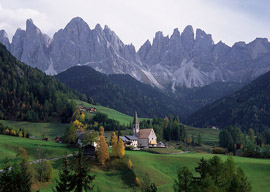 The Remembrance Day commemorations in honor of the war dead always prompt even me to think that the Italians” reputation as a nation of cowards on the battlefield is unfair.

But the Italians are cowards in another sense: They are afraid to remember, let alone honor, their war dead. So they do not get to hear about them, nor does the world.

I can understand that the Italians want to run away from their past in World War II, when they backed the wrong side and their battle performance was disastrous. It was the 1939-45 war that spawned the joke that still does the rounds even today:

Q: How many gears does an Italian tank have?
A: Five”one for going forward, four for going backward.

The Italians have a reputation that if they are fit for anything, it is only to stab you in the back.

“The Italians have a reputation that if they are fit for anything, it is only to stab you in the back.”

And yet to find irrefutable evidence of Italian courage there is no need to leap back though the millennia to ancient Rome’s military prowess. It is enough to go back to World War I. In “The Great War” the Italians fought with extraordinary bravery and sustained appalling battlefield casualties. They also fought on the right side. (Allied military deaths in the First World War: France, 1,397,000; Britain, 886,939; Italy, 651,000. Not bad, not bad at all.)

But in Italy, Remembrance Day (as the British call it) or Veterans” Day (as it is known in America) hardly even registers on the national radar screen. This is very odd and probably insane.

For it is above all to remember the deaths of those who died in the 1914-1918 war that so many countries in Europe and elsewhere observe the somber but uplifting ritual each year on November 11th“the day now nearly 100 years ago that the “war to end all wars” which had claimed 17 million lives ended “at the eleventh hour on the eleventh day of the eleventh month.” Those were the terms of the armistice signed by the defeated Germans in a railway carriage in the forest of CompiÃ¨gne near Paris.

Nor on November 11th are people in those countries doing anything to which even an honest West-hating left-wing “pacifist””and Italy has more than its fair share of the breed”could object. They are not celebrating war, military victory, or national aggression. They are simply remembering and honoring the sacrifice of those among their countrymen who died in war.