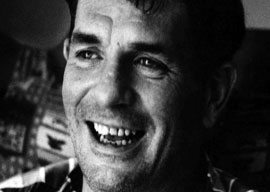 With publication of On The Road in 1957, Jack Kerouac became an overnight celebrity”not just famous, but a phenomenon. The experience brought him to another level of confusion, self-doubt, and hard drinking. Kerouac had walked into Robert Giroux’s office in 1951 with a 120-foot Teletype roll manuscript, now known as the scroll version of the novel. Giroux, a traditionalist editor hailing from Columbia University, had published Jack’s first novel, The Town and the City, in 1950, but he could not comprehend this strange new submission that departed from all known conventions.

It took six more years, with Allen Ginsberg acting as unofficial agent and cheerleader, to get the book accepted in New York. It was Malcolm Cowley of Viking Press who finally made it happen. The New York publishing world did not recognize what it had. In the meantime, Kerouac stayed true to his new way of writing and to his life as a subterranean, a desolation angel, and a dharma bum. He crisscrossed the country and wrote seven books of “spontaneous bop prosody.” All of them were rejected out of hand, only to be published within three years after On The Road became a sensation.

I suppose it was the glowing NY Times review of On The Road on September 5th, 1957 that made the book. Detractors have suggested that the reviewer was a stand-in. His name was Gilbert Millstein, who had been working for the Sunday edition of the Times since 1949. He proclaimed the long-delayed publication to be “a historic occasion” and that the book “is the most beautifully executed, the clearest and most important utterance yet made by the generation Kerouac himself named years ago as ‘beat’ and whose principal avatar he is.”

“Whatever there is to be learned from Jack Kerouac, stick with the printed word.”

Only three days later, on September 8th, the Times proffered another review””In Pursuit of Kicks””with a less glowing perspective. The reviewer was David Dempsey, whom the Times described as “a freelance writer and critic of fiction.” Dempsey proclaimed the book to be “a large affectionate lark” and that “Jack Kerouac has written an enormously readable and entertaining book but one reads it in the same mood that he might visit a sideshow”the freaks are fascinating although they are hardly part of our lives.” Both reviews are accurate.

Last month, The New York Times reviewed a new movie”Big Sur“based upon the book which Kerouac wrote three years after the publication of On The Road. The trailer looks promising. I have not seen the movie. It opened in Manhattan. The DVD will be released in January.

The book is important and pivotal. It reminds me of Scott Fitzgerald’s The Crack-Up. Scott’s glamorous world had been shattered by the Great Depression. Jack’s private dream world was exploded by On The Road‘s success. True, both writers relied heavily upon alcohol from the start. They drank even more to cope with the new, transforming circumstances that blindsided them. They hit the wall.

In the novel, Kerouac wakes up, hung over and groaning, in a Skid Row hotel room in San Francisco. He escaped from New York in July 1960 via the train, barricading himself in a first-class compartment from which he contemplated the passing countryside that he knew so well. The purpose of the trip was to dry out and take stock. The visit was supposed to be kept secret, known only to Lawrence Ferlinghetti, owner of the famed Bohemian bookshop City Lights in North Beach.

Ferlinghetti had offered Jack the use of his primitive cabin at Bixby Canyon in the northern precincts of Big Sur on the rugged Pacific coast. There it was hoped that Jack could enjoy the solitude and relax. The plan was for Ferlinghetti to pick Jack up at the station and head out to the cabin. Jack did not follow the plan. He failed to inform Ferlinghetti of his arrival. Instead, he headed for Skid Row, then the bookshop, then the bars. It was Greenwich Village all over again, only maybe worse.

Jack’s Book, first published in 1978, is a self-styled oral biography with quotes from all sorts of people who knew Kerouac at various stages in his journey. There is some wonderfully evocative material in it about the beat scene in Manhattan between 1957 and 1960. It gives you an idea of what Kerouac was escaping from.