When Kindergarteners Are Killers 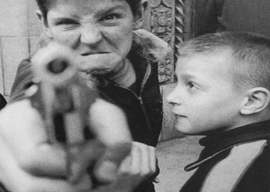 Near midnight on Friday, June 3, Kansas City police were called to a house in a blighted section of town to find an eighteen-month-old male corpse that had been floating dead in a bathtub. Police originally assumed that Jermane Johnson, Jr.’s death was accidental until an unnamed five-year-old relative of Johnson’s, a girl whom a neighbor described to reporters as “ornery,” volunteered to social workers at the scene that she’d purposely dragged him into the bathroom and held him underwater until he stopped moving because he “cried too much” and “made too much noise.”

The entire sordid situation involves an apparent chain reaction of soft and deadly neglect. The dead infant is a relative of the five-year-old girl and had been staying with his grandmother in Kansas City for a few weeks while his father, Jermane Johnson, Sr., was living back in St. Louis. Both children, along with two others, were being babysat by a 16-year-old girl “with mental disabilities” who’d fallen asleep when the drowning occurred. The babysitter had also apparently left the bathtub filled with dirty water after children had bathed in it. An “adult” related to the alleged young killer had left the house to drive to a bus station and pick up Jermane Sr., who had come from St. Louis to retrieve his son. But his infant boy was dead by the time he arrived. Last Monday, the boy’s father wrote on Facebook (reprinted as typed):

I just got ask the hardest question that no parent should never answer. What kind of caskets do I want to put my son in.

Police are investigating Jermane Jr.’s death as a homicide, with the five-year-old girl as the prime suspect. “As of right now, yes, from her statement, she is a possible suspect,” said Kansas City police spokesman Darin Snapp. “She said she got angry because he would not stop crying and she held him under the water until he stopped crying.”

“It wouldn’t be the first case in history of extremely young killers who seemed to have committed their acts with a modicum of intent.”

The girl is unlikely to be tried for murder, as the prevailing wisdom is that five-year-olds are incapable of grasping the “permanence” of holding someone underwater until they stop moving. An array of child advocates came forth to reiterate this theme in the wake of the toddler’s drowning. Bart Lubow of the Juvenile Justice Strategy Group said “the notion that there was intent there is silly.” One clinical psychologist insisted that a five-year-old is not neurologically developed enough to understand death. “The mind of a five-year-old is not really capable of formalizing intent for homicide,” said Jackson County, MO, juvenile officer Mary Marquez. Another psychologist told TV reporters that the girl may have been exposed to violence at home or by playing video games. Ironically mirroring hoary old Catholic doctrine that children aren’t morally responsible for their actions until they’re at least seven or eight, secular expert opinion was solidly behind the idea that a five-year-old could never kill someone while comprehending that their victim would stay dead.

But if she merely wanted to keep the baby quiet, she could have stuffed a sock in his mouth or put him in another room. Instead, she dragged him into the bathroom and forcefully held him underwater. Given the circumstances, is it possible that this girl was old enough to purposely murder someone but still too young to apprehend the consequences of bragging about it to social workers?

It wouldn’t be the first case in history of extremely young killers who seemed to have committed their acts with a modicum of intent.