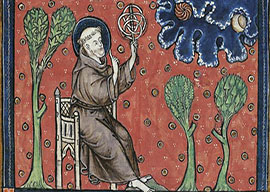 Pope Benedict’s trip to Ole Blighty is over, and that sanctimonious gasbag Dawkins didn’t manage to arrest him in the name of secular humanism. While I’m not a believer myself, I often wonder at such professional atheists who cover themselves in the mantle of “science.” Don’t they know any history?

What we refer to today as “science” is something which was invented by humans, rather than springing forth from Jove’s forehead in some ancient time before time. There is a definite date before which there was no science and a date after which there was science. This isn’t controversial or mysterious: We know exactly when it happened, and some of the original manuscripts which invented science and modern thought still exist.

Science was invented in the “High Middle Ages.” This was an era of great prosperity in Europe (and everywhere else, really). It was warmer than it is now: Grapes grew in Northern England. Since Europe was an agricultural economy, this meant much more prosperity than in years previous. During this era, Europe was wealthy enough to fund the Crusades, something we arguably can’t afford today.

The Black Death ended this era. Had this disease not spread to Europe in the 1340s, we might have had a different world. Europe didn’t reach the High Middle Ages” economic development or population densities again until the Industrial Revolution. Considering that Europe’s economy at the time was agricultural, Europe never really rose to those heights again.

This was a time of knights. It was a time the Vikings” descendants reached their true potential as civilized people. The pagan Vikings were fierce warriors, but the civilized Christian Normans were unstoppable. This tiny tribe of supermen conquered southern Italy. They conquered Byzantium (with help from the treacherous Venetians). They were the last people to conquer England. They conquered the Holy Land. The other Christian Vikings, the Kievan Rus, founded a prosperous trading state on the Volga, which remains one of the highest forms of Russian civilization (also destroyed by the treacherous Venetians” connivance). Great conquerors such as El Cid and Gualdim Pais forced the Saracens from Spain and Portugal during this time. The great European universities were founded during this era: Bologna, Coimbra, Paris, Oxford, Salamanca, Cambridge, Montpelier, Padua. The very idea of a university was invented at this time, and it came straight from Roman Catholic monasticism. Venice, Genoa, Kiev, and the Hanseatic League made vast fortunes in international commerce. Musical notation was invented. Windmills, eyeglasses, printing, and improved clocks were all invented around this time, with inventions such as paper, the spinning wheel, and the magnetic compass being introduced from abroad by the great commercial city-states.

“Science was invented to give glory to God by examining his natural laws, not to overthrow him from his throne.”

We have visual evidence of this era’s glory and prosperity in the form of the Gothic cathedrals. Sleepy little towns such as Chartres were so wealthy and had so much free time, they were able to construct these magnificent structures. Think about Chartres Cathedral for a moment. Chartres could not afford to build such a thing today with all of our technology and wealth because it doesn’t have any spirit as it did in those days. In fact, no place in modern Europe has either the artistic spirit to build such a magnificent object or the spiritual will to make something so grand. This is an object which required 75 years to complete. When was the last time a modern culture had the spirit to create something which takes 75 years to construct? Yet, it was built by semi-literate laborers in an agricultural economy, as were dozens of other such things all over Europe at around the same time. One can look at the Gothic cathedrals as the physical crystallization of the heroic spirit which produced science in the same sense that one can look at the Parthenon of Pericles as the physical crystallization of Plato and the Greek philosophers” spirit.

History’s first scientist was Robert Grosseteste, although his work is little known in popular education today. He was born in 1170 or so to a humble Suffolk family. He found his calling in the Catholic Church, as important a source of social mobility then as the university system is now. It was Grosseteste who formulated the first description of the scientific process. He was the first European in centuries to study Aristotle’s works and the first to study Arab natural philosopher Abu Ibn al-Haytham‘s writings. From these thinkers he developed the idea of “composition and resolution,” which is the scientific method in itself. He advocated using mathematics to learn about reality. He also developed the idea of peer review. He built upon the notion that one could learn natural law’s general principles by studying specific examples. He developed the all-important idea of falsification, to separate true from false ideas.