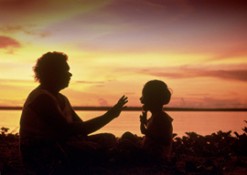 “Train up a child in the way he should go: and when he is old, he will not depart from it.” So King Solomon told us (Proverbs 22.vi). A great many parents, down through the ages, must have responded to that with a sigh, or a hollow laugh, followed by the Hebrew, Aramaic, Greek, Latin, or other-language equivalent of: “If only!”

You can number me among those parents. Behold Danny Derbyshire, aged six-and-a-half, playing the piano.

Neither my wife nor I had any musical training in childhood. We were determined that our own children should not be similarly deprived. We started them early: Nellie on the violin, Danny on the piano. We purchased the instruments; we hired the instructors; we supervised practice sessions; we encouraged and exhorted.

Nellie, who has a complaisant personality, stuck with it, and now plays for her high school orchestra, though without any very great distinction or enthusiasm. Danny, who has a will of forged tungsten, resisted from the start. Notice how his fingers are splayed flat on the keys in that photograph. That was after a year or so of dogged efforts to get him to curl those fingers in the proper manner for piano-playing, including some piano-teacher tricks like balancing coins on his knuckles. No: he was going to play flat-fingered.

He went on in that style for another four years, at which point he refused to have anything further to do with the piano. Neither bribes nor threats had any effect. The piano now sits forlorn and unused—and, I am sure, badly in need of tuning—in a corner of the living room.

“That there are bad parents, nobody doubts. What does one say, though, about parents who have raised two good and wholesome citizens and one sociopath?”

I should say at this point that while I have given up hope of much influencing the future course of my son’s life, I am not in despair of his prospects. He’s healthy and smart, and can be personable when he chooses to be. I’ll even confess that his determination to kick against the pricks (Acts 9.v—I’m having a fire sale on biblical allusions this week), when it isn’t annoying the heck out of me, moves me to a mild sort of admiration. Annoying, yes, but not the stuff that good slaves are made from.

These thoughts followed on Richard Friedman‘s piece in the July 12 New York Times. Friedman, who is a professor of psychiatry, tackles the “bad seed” issue—the issue, that is, of kind, competent, and loving parents who turn out sociopathic kids. He gives us the case of “an intelligent and articulate woman in her early 40s” who is driven to distraction by her wayward son. The boy had, she said, acquired a reputation for being mean.

I asked her what she meant by mean. “I hate to admit it, but he is unkind and unsympathetic to people,” she said, as I recall. He was rude and defiant at home, and often verbally abusive to family members.

The simple-minded Solomon-ism that is most people’s default position on child-raising—if you do this, the kids will turn out like this—fails here, as these same parents had raised “two other well-adjusted and perfectly nice boys.” That there are bad parents, nobody doubts. What does one say, though, about parents who have raised two good and wholesome citizens and one sociopath? Here’s what Dr. Friedman says:

Everyday character traits, like all human behavior, have hard-wired and genetic components that cannot be molded entirely by the best environment.

Which is pretty much what Hazlitt said back in 1821.

That it still needs saying, in the science section of a respectable daily newspaper, is a consequence of a very odd fact about human intellectual history. In between Hazlitt’s time and our own the human sciences took a long detour through wish-fulfillment fantasy—a dream of human malleability and perfectibility. The dream had many episodes, some very horrible (New Soviet Man), some sinister (the rat-in-a-box behaviorism of Watson and Skinner), some merely bizarre (Freudian talk-therapy), some just silly (Baby Einstein).

We seem to be coming to our senses. You will hear people say that this is a result of advances in genetics, but that isn’t really true. We currently know very little about the genetic mechanics of human personality—how these genes cause this behavioral tendency, with all the links of the causal chain filled in from meiosis to neurosis.

We do, though, have a wealth of information from family studies—genealogies, siblings, twins, adoptees. What it tells us, and what every new result just further confirms, is that Hazlitt and Dr. Friedman are right, while Marx, Freud, Skinner, the marketers of Baby Einstein, and well-nigh every education theorist and politician in the land, are wrong. The individual human personality has contours of bedrock laid down by biology, on which is scattered a soil, thicker or thinner, of early habit and training, in which grows a vegetation of taste, culture, acquired knowledge, and chance variation.

It all sounds depressingly deterministic. At one level, it is: that forged-tungsten will of my son’s was not learned, acquired, or instilled. It was there from the beginning: “the first predisposing bias.”

However, it is still the case that sheer will can make things happen in the world. Possibly, at some abstract metaphysical level, it is bound to do so, but that is a level at which our everyday beliefs can never operate for more than a strained few minutes. Hazlitt may have held glumly deterministic views on the individual human personality, but his great personal hero was Napoleon Bonaparte.