When Paris Shut Down 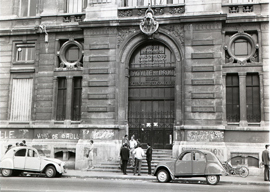 Bonjour, mes amis! Fifty years ago this month I was living in Paris and life was, shall we say, grand. Back then there was nothing like Paris in the spring and early summer, with formal balls galore, polo in the Bois de Boulogne, and late-night parties in Left Bank clubs such as Jimmy’s. At 30 years of age one felt omnipotent, especially when wearing boots and riding breeches and galloping down the polo field cheered on by the fairer sex.

Then “les événements” came about, and the high life in the City of Light took a leave of absence in a hurry. The preceding year had been one of the most brilliant of the postwar seasons. American-born Midwesterner Sheila McIntosh, Countess de Rochambeau, had given a grand ball in her ch”teau just outside Paris, as had the Guy de Rothschilds in theirs, Ferrières, followed by the Agnelli ball in the Bois de Boulogne. I had attended all three, plus some less glamorous ones in the city itself given by young friends who had not as yet inherited. (They had to do with parties in their “hôtels particuliers,” as town houses are called in the land of cheese.)

The polo season in Paris takes place mostly in June, and the main polo fields are situated in the Bois de Boulogne, where the private club called Bagatelle holds a very strict line between commoners using the park and its members. (I left Paris for good in 1973, so I don’t know whether the club has been democratized since, but I surely hope not.) During May of ’68 there were rumblings of student discontent, dismissed by my crowd as “rien de special,” the usual grumpy French students complaining about nothing in particular. Mind you, once the Sorbonne was occupied by “les élèves,” even I noticed the change because I had to cross that venerable institution on my way to various Left Bank nightclubs. I remember one warm May night being stopped by a mob in my Maserati and asked to contribute to their cause. I had a girl with me and had just finished a diatribe against left-wing illiterates at the Sorbonne, so I couldn’t lose face. (She was a sexy Brazilian.) “Kill me, but I am not giving you a penny,” I told the mob. They began to rock my car, but then one of the leaders stepped in and told them I had been honest and to let me pass. They did and I left, followed by boos but nothing else. This was in May.

“By mid-June there was no gas in Paris, no public transport, and all the main boulevards had been dug up by protesters.”

By the time June arrived, Paris was at a standstill. A red-haired firebrand by the name of Danny Cohn-Bendit had managed to close down the city. The student protest had spread from institution to institution, and then to trade unions and to all workers. The whole thing had begun as a protest against the Vietnam War and had morphed into an end in itself, one long protest against the insecurity of jobs and the prospects of getting them. Incredibly, there were no specific demands by either the students or the workers.

By mid-June there was no gas in Paris, no public transport, and all the main boulevards had been dug up by protesters. The nightclubs, however, remained open and doing record business. Élie de Rothschild, head of the polo, canceled the season. I called him a coward to his face and was forced to apologize. In the practice game following our altercation poor Élie lost his right eye when hit by a ball he never saw coming. That evening, upset about Élie and unable to go anywhere—I lived near the Bois, and the clubs were on the Left Bank—I took my best pony, Tango, and rode it into Paris. Everywhere I went people laughed and offered to take care of it while I was at Jimmy’s.

President de Gaulle then flew to Germany to see if the army stationed there was still behind him. The paratroop general Massu, a tough Algerian war vet, greeted him. “Toujours con, Massu?” said le grand Charles. “Oui, toujours Gaulliste,” answered Massu. The play on words became a rallying cry for the right. (Always a cunt, Massu? Yes, always a Gaullist.)

Then, out of the blue, the revolution became a game. The civilians would line up behind a barricade, the tough CRS troops would baton-charge us, and we would run into side streets and hide. The worse one got if caught was a beating from their rather long “batons.” One night a CRS gendarme threw a tear-gas grenade into Jimmy’s, driving all the swells, including Françoise Sagan and Catherine Deneuve, out into the street where they were manhandled by the fuzz.

The British students tried to emulate the French, but it never took off. The next year I was the only photographer allowed to cover the wedding in Vevey of Charlie Chaplin’s second daughter to a Greek buddy of mine. When I had five minutes with the great man he sounded furious. His point was a valid one. The French had nothing to protest about but got all the publicity and attention of the world’s press. “The Czechs were fighting for freedom from Soviet tyranny while the French were posing,” or words to that effect. True, but when was the last time the media got it right? Au revoir, mes amis!