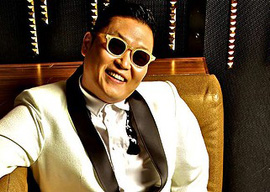 Did you ever have two different news stories collide in your head, leaving both with dangling fenders, shattered headlights, and leaking radiator fluid? I did, just this week.

Exhibit A is the Korean pop singer who calls himself Psy. This is the chap who made that “Gangnam Style“ video, which at the time of this writing has 932,421,123 YouTube views”an all-time record.

I liked “Gangnam Style.” It was fun and bouncy and full of pretty girls. My pleasure in looking at the girls was only slightly diminished when I read in the October 8 issue of The New Yorker that their good looks are in many if not most cases the result of heroic plastic surgery, for which “Korea is by far the world leader in procedures per capita….” Those pixie faces are quite atypical for the ethny. Ri Sol-Ju, First Lady of North Korea, displays a more traditionally Korean style of pretty, her face round and well-fleshed. The path from round to pixie is arduous indeed, if The New Yorker can be believed:

Women…have their cheekbones shaved down and undergo “double jaw surgery,” in which the upper and lower jawbones are cracked apart and repositioned, to give the whole skull a more tapered look.

Back to Psy. Having attained worldwide fame, he was naturally booked to perform at a lot of venues, including last weekend’s “Christmas in Washington,” an annual charity bash always attended by the POTUS and his family.

“If I can approve of GÃ©nÃ©ration Identitaire wanting their country back, why am I mad at Psy for wanting his country back?”

Three days before the show, we”the 900 million or so non-Koreans who had been happily jigging along to “Gangnam Style””learned that in 2004 our hero had performed a song with outrageously anti-American lyrics to Korean audiences. “Kill the f***ing Yankees!” Psy had crooned. Then, for good measure:

Kill their daughters, mothers, daughters-in-law, and fathers!
Kill them all slowly and painfully!

Two years before that he had performed in a different anti-American protest show, smashing a model US tank onstage.

This kind of thing is catnip to opinion journalists. Should Psy’s invitation to the charity bash be pulled? (It wasn”t.) Should these revelations about anti-Americanism sour us on him? (They soured me.) Benny Avni in the New York Post took a mild approach, putting Psy’s transgressions at ages 22 and 24 down to youthful folly:

It’s a well-worn trajectory. To paraphrase an old clichÃ©: If you don”t question America in your 20s, you”re heartless; if you still hate it in your 30s, you”re brainless.

Mmm, yes and no. Sure, a lot of us do dumb, reprehensible things in our youth. And sure, Psy expressed abject contrition. But he only did so after the news of those anti-American follies came out, three months into the worldwide fame of “Gangnam Style.” And really, “Kill the f***ing Yankees!”? Would that be the Yankees who took nearly 37,000 combat deaths to spare South Korea from the horrors of communism?

Exhibit B is GÃ©nÃ©ration Identitaire, an organization of young nationalists in France. These are the people who occupied a mosque in Poitiers back in October. Poitiers is close to the battlefield where Charles Martel stopped the Muslim invasion of Europe in 732 AD.