When Sci-Fi Dared to Dream 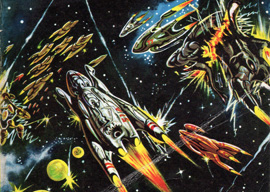 Here’s a cultural artifact of the minor sort: Issue Number 82 (July 1957) of Authentic Science Fiction, a monthly magazine of stories in that genre, 128 pages, sparsely illustrated.

You can get anything on the Internet nowadays. I got my copy from an Australian website while randomly browsing one day. I bought it because I had quite a vivid memory of it. It was the first sci-fi magazine I ever owned. I had an uncle who was a sci-fi buff; most likely he gave it to me.

A coincidence of three things prompted me to pull down that copy of Authentic from the bookshelf and browse nostalgically in it. Two of the things were news items: this report on space travel’s health hazards, and the death of Moebius.

That’s not MÃ¶bius of the famous strip, which in all fairness should be called the Listing strip. That MÃ¶bius died in 1868. (Q: Why did the chicken cross the MÃ¶bius strip? A: To get to the same side.) It’s Moebius the sci-fi comic-book artist.

The third of my three prompts was a post-lecture question someone asked me at an event the other day: What kind of things did I read as a kid? The short answer: Once I reached the age at which I was able to pick my own reading matter, I read science fiction.

Before that I read whatever was put in front of me, which fortunately included some good nutritious stuff: Lewis Carroll, Mark Twain, R. L. Stevenson, R. M. Ballantyne, and my dad’s 1908 edition of Arthur Mee’s Children’s Encyclopedia. (That last, a charming period piece full of little boys in sailor suits and little girls in black stockings, still had enough vitality in 1973 to incite a riot that left four people dead.)

Once I was able to choose my reading material, I read very little else except sci-fi all through my teen years. It was my great fortune to be emerging into imaginative daylight just as sci-fi was in its high summer. Heinlein was writing, as were Ray Bradbury, Isaac Asimov, Poul Anderson, Robert Silverberg, A. E. van Vogt, Theodore Sturgeon, and C. M. Kornbluth.

We Brits were somewhat of a backwater in sci-fi as in pop music, our writers mostly playing Cliff Richard to America’s Elvis, but we had two first-magnitude stars in Arthur C. Clarke and John Wyndham, as well as several others who deserve to be better remembered than they are: Brian Aldiss, John Brunner, Eric Frank Russell, and John Christopher.

If you never felt sci-fi’s appeal, I can’t transmit it to you. Kingsley Amis caught it best when he wrote that science fiction’s purpose is “to arouse wonder, terror, and excitement.” I still feel a trace of the old thrill while turning the yellowing pages of that 1957 Authentic. It was a British magazine, struggling in a tiny market, yet that random issue (one of the last: Authentic folded later that year) had stories by Asimov, Silverberg, and Brian Aldiss. These guys were prolific beyond belief. Kurt Vonnegut once said that his original aim in life was to become a sci-fi writer, but he couldn’t keep up the pace.