When the Military Pushed Back 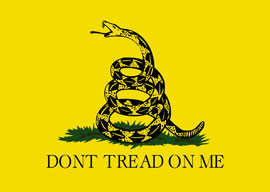 In the latest political assault on the spirit and traditions of our fighting forces, US Navy brass has banned SEAL troops from wearing the colonial “DON”T TREAD ON ME” patch on their sleeves. You can imagine how the SEALs themselves feel about this; or if you can”t, here’s former SEAL Carl Higbie to tell you.

In related news, the West Point chapel has just hosted its first “marriage” between two men.

Women in submarines, buggery in the barracks, crazy Muslims wafted up the promotion ladder in the name of “diversity”…It’s all pretty depressing. More depressing yet is the absence of any military pushback against the imposition of Cultural Marxism on the military. No one protests, no one resigns.

Is a military coup possible in the USA? Most people would say not. The Anglo-Saxon tradition of military subordination to civilian authority, they say, is too deeply ingrained.

“Politics is the art of the possible, and it is not possible to make a spirited population acquiesce quietly to being ruled by those who hate them.”

I”m not so sure. With the increasing Hispanicization of our society”disappearing middle class, ethnic disaggregation, downward-drifting mean IQ, and actual Hispanicization“there may be a Pinochet in our future.

And that Anglo-Saxon tradition has occasionally sprung leaks. As it happens, we are coming up to the centenary of one of those leaks. It’s worth revisiting this event because it illustrates a way in which conscientious military men can push back against civilian authority without any violation of their honor or duty.

The first thing to be said about the 1914 Curragh (silent “g”) Mutiny is that it was not a mutiny in the strict military sense. No serviceman turned his weapons against his superiors; no one refused a lawful order. Modern reference books list the Mutiny under “Curragh incident.” However, it is still generally spoken of as the Curragh mutiny, probably because that sounds more dramatic, and we like our history spiced up with some drama.

The context was the Irish Home Rule Bill of 1914. Ireland was part of Britain, ruled entirely from London, and sending members to the British Parliament. The 1910 election had delivered a hung Parliament with Irish nationalist parties holding the balance. Liberal Prime Minister Asquith cut a deal with the Irish Members, moving a Home Rule Bill before the House of Commons in 1912. Ireland was to have its own government and Parliament deciding on Irish affairs, yet still under the Crown and with ultimate authority in London.

Asquith’s Bill was passed by the Commons but voted down by the Lords, the upper house of Parliament. There had however been some unrelated constitutional changes in 1911, stripping the Lords of their power to block laws indefinitely. A bill that passed the Commons in three successive sessions would become law whatever the Lords did. The Home Rule Bill passed again in 1913, and again in May 1914. Home rule would be law.

This was horrifying to the Protestants of Ulster, who faced the prospect of being ruled by people”Irish Catholics”who hated them. You may say the Catholics had good cause to hate the Ulstermen, and you may be right; but politics is the art of the possible, and it is not possible to make a spirited population acquiesce quietly to being ruled by those who hate them.

The Ulstermen organized themselves into a volunteer army, several ten-thousand strong. They smuggled in 25,000 rifles and millions of rounds of ammunition from Germany. They said unkind things about Asquith: “He has behaved like a cardsharper and should never be received into a gentleman’s house again””the Earl of Crawford.

It was plain that if Home Rule were to become not merely law but fact, it would be over the dead bodies of a great many Ulstermen. Historian George Dangerfield describes what was looming up in everyone’s imagination: “a picture of English soldiers conscientiously annihilating a Citizen Army which advanced against them under the Union Jack, singing “God Save the King.””