When the Punishment Fits the Crime 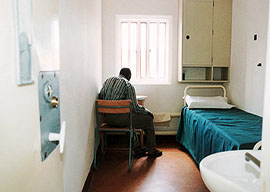 Was that a New Year’s resolution of Prisons Minister Crispin Blunt I was quoting?

Actually, they were lines from Gilbert and Sullivan’s The Mikado, in which my godson was to play the part of The Lord High Executioner that evening.

I was leafing through the program while we circled in preparation for landing at Farnham following our visit to Bellzone, a mining project in Guinea, West Africa.

Our steward said that he was surprised by the delay, as air traffic had earlier been reported light.

Our trip to Guinea had been interesting, and we had concentrated our time visiting the iron ore project in Simandou and the bauxite resources to the north of Kalia as well as the rail and port facilities.

It was just before lunch on the final day that a respectable-looking middle-aged gentleman had thrust a pamphlet into my hand and persuaded me to read it.

The pamphlet outlined the story of missionary pastor Michel Loua of Jacksonville, Texas, a convert to Christianity who unfortunately got caught up in the politics of Guinea’s presidential election. He had been thrown into one of the country’s prisons and on the night of November 14th was tortured, shot through the heart, and had his body mutilated. It was reported that to enhance his own leadership, Guinea’s president had sent soldiers to the prison to offer Michel Loua as a human sacrifice.

“If they were allowed, they would book their prison beds ahead and not even wait to commit whatever crime it takes to earn a place.”

Inside the pamphlet were copies of photographs portraying conditions in the prison. They were deeply shocking.

I dug into my briefcase to find them, and just as I laid hands on them the steward reappeared in the aisle.

“If you look out of the window on the left-hand side, you will see a plume of smoke.”

He was right. Near to the coast a thin smoke column drifted gently up into the sky.

What we were witnessing”and the reason for our delay”were the last vestiges of the New Year’s riot at Ford Open Prison.

What a contrast from Guinea’s barbaric conditions!

Was it not for the situation’s seriousness, what happened at Ford could easily be taken for a joke.

Ford is an Adult Male/Category D prison, capable of housing over 550 men and operated by Her Majesty’s Prison Service.

The prison’s governor is lesbian Sharon Williams, who separated from her husband to live with one of her officers, an unsavory-looking creature named Jackie Jefcut. Today’s prison story is a scriptwriter’s dream. Turn Ford into a soap opera, and EastEnders would never get a look in.

Lesbian Sharon Williams answers directly to Prisons Minister Crispin Jeremy Rupert Blunt, Member of Parliament for Reigate, formerly an officer in the 13th/18th Hussars who left his longsuffering wife Victoria to “come to terms with his homosexuality,” more commonly termed “coming out of the closet.”