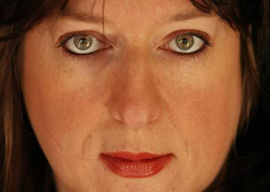 The only two books that permanently reside on my dinky desk are Roget’s Thesaurus and a smelly, brittle copy of The Boy Looked At Johnny: The Obituary of Rock and Roll.

I bought Julie Burchill’s book (cowritten with her future husband Tony Parsons) when I was in 11th grade. As one of my hometown’s few punks, I lived vicariously through the iconoclastic English music press. The NME, Sounds, and Melody Maker delivered breathless dispatches from a colorful faraway land where new musical and fashion trends seemingly sprang up every hour.

Reading Burchill and Parsons”the NME‘s “hip young gunslingers” who were only a few years older than me”profoundly influenced my own (ahem) writing style. Judging from the kind of hate mail I get, it’s a style that North American readers who weren”t marinated in the blunt, brutal, “screw you“ brew that is British criticism and satire find confusing and distasteful. (Whereas “a bunch of dead chrysanthemums on the grave of a still-born West Indian baby” is my Jesus Prayer.)

“Perhaps our grandchildren will ask us why we didn”t help rather than humor such disturbed men and women.”

I forgive today’s Julie Burchill her vestigial chav Marxism and schlock-fiction millions because when I feel myself chickening out prose-wise, I carefully crack open her first book at random and mentally forge her name on my permission slip to bitch:

In a famous-in-England libel case, an actor sued Burchill for calling him “hideously ugly””and he won. You”d think nothing could top that as the most absurd “controversy” of our heroine’s career.

On January 13, The Observer printed her perfectly sensible and not even terribly original contention that “anti-bullying” transsexual activists “and their grim groupies” are among the biggest bullies around.

Burchill’s Exhibit A: The tranny pack relentlessly hounded feminist Suzanne Moore for writing that “women are angry about not having the ideal body shape”that of a Brazilian transsexual.”

the veteran women’s rights and anti-domestic violence activist Julie Bindel, picketing events where she is speaking about such minor issues as the rape of children and the trafficking of women just because she refuses to accept that their relationship with their phantom limb is the most pressing problem that women”real and imagined”are facing right now.

Burchill aptly compared “the trans lobby” to those feral urban youth who shoot each other whenever they feel “disrespected.”