Where Are All the Tranny Dudes In Politics? 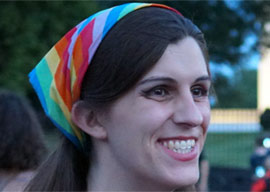 During last Tuesday’s minor off-year elections, a glorious total of “eight openly transgender candidates” swept to victory, squashing the hopes and stomping on the necks of transphobic bigots nationwide, who really need to either repent or curl up and die already.

The victors include Danica Roem, a part-time heavy-metal singer from Virginia who effectively shat on the face of her Republican rival Bob Marshall, AKA “Bigot Bob,” a man who self-marinates in hatred to the point where he once thought it was cute to refer to himself as Virginia’s “chief homophobe.” In 2006, inspired by nothing more than the rancid fumes of his own galloping—and undoubtedly closeted—loathing for gays, Marshall sponsored an anti-gay-marriage constitutional amendment. Over 1.3 million Virginia voters—undoubtedly high on the same Spicy Hate Sauce that Marshall had been slurping—approved Marshall’s amendment but in 2014 were thankfully struck down and rendered electorally impotent by a single wise black female judge who’d been appointed by Barack Obama. We must not let hate win, even if hate outnumbers love by a factor of 1.3 million to one!

Other tranny victors last Tuesday included Lisa Middleton, a male-to-female tranny who resembles Robin Williams in the role of Mrs. Doubtfire. Riding a wave of gender delusion to victory in Palm Springs, CA, Middleton became “the first transgender person elected to a non-judicial office in California.” Middleton will join three “queer” members of Palm Springs City Council—a city that currently has no heterosexuals serving in that capacity.

“I sense it’s nothing more than a reaction to the fact that in the current climate, there’s almost nothing good about being a man.”

In the tiny town of Doraville, GA—which lurks right outside Atlanta’s city limits—a hulking tranny named Stephe Koontz edged out some bigot by a margin of only six votes to become a city councilwoman.

Also winning by only six votes was Gerri Cannon of New Hampshire, who still looks masculine no matter how he dresses but will sit on a local schoolboard pretending to be a woman and accusing anyone who snickers of being a transphobic bigot.

In Connecticut, a 29-year-old biological dude who calls himself Raven Matherne and who still, I must quite frankly state at the risk of sounding transphobic, looks like a dude—became that state’s “first openly transgender lawmaker ever.”

In the aggressively progressive city of Minneapolis, a dreadlocked beast named Andrea Jenkins—born a man but who insists he’s not—“became the first trans woman of colour elected in the nation.”

While this is all undoubtedly cause for celebration, for joyously sniffing amyl nitrite and having unprotected felching parties far beneath manholes in urban sewers across this nation, are you noticing a pattern here? Yes, I am, too—all six of these winners were born men—or, if you prefer to sound like a crazy person, had the male gender assigned to them at birth—and decided one day through magical thinking and varying degrees of medical intervention that they were women.

Of Tuesday’s eight tranny winners, only two were born women and one day magically they decided they were men. Joining Andrea Jenkins on the Minneapolis City Council is a sprightly bearded woman named Philippe Cunningham. And in Pennsylvania, a biological woman with hormonally enhanced facial hair who now calls herself Tyler Titus won some sort of obscure school board position to become “the first openly transgender person elected to office in Pennsylvania.”

Eight trannies elected to office in one night? That’s good. Only two of them now identify as men? That’s bad—especially if one wants to pretend that gender is fluid. If one even dares to notice a firm statistical pattern that the roaring majority of trannies are men who claim they’re women, one risks subverting the entire Tranny Gospel. If, as the case seems to be nearly everywhere worldwide, the overwhelming majority of people who desire to change their sex are men who seek refuge in womanhood, this might suggest that our current cultural climate offers very few perks for men and plenty for women.

But both historically and currently, this pattern remains stubborn. Perhaps the first known tranny politician in American history was a certain Joanne Conte, who underwent a sex change back in 1973 when I believe they still used rusty meat cleavers and hormone injections derived from the fossilized flesh of pregnant female stegosauruses. In 1991, Conte campaigned and won a spot on the City Council in Arvada, CO. Rivals hired an investigator to unearth undesirable facts about Conte’s past, and when it was revealed that “Joanne” had been born a man, he was never reelected.

In 1992 a black man who called himself Althea Garrison and looked like Slappy White wearing an Aunt Esther wig won a seat in the Massachusetts state legislature. Garrison’s real gender was revealed shortly after his election, and he failed to win a second term in 1994.