Where Does Rand Stand? 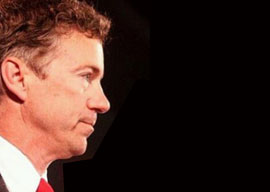 Starting shortly before noon last Wednesday, the curly-haired and elfin-faced Kentucky Senator Rand Paul spent thirteen hours filibusterin’ Barack Obama and Eric Holder’s balls about whether the federal government claimed the right to kill American citizens on US soil without trial. His performance earned both praise and scorn from both left and right, which suggests that the country’s prefab and punchably tiresome blue/red divisions may be undergoing a tectonic realignment.

Or maybe not. Despite the tremendous publicity his marathon speech generated, Paul did not appear on the usual Sunday-morning round of political TV programs, which chose instead to interview the puffy-cheeked and criminally unexceptional Jeb Bush, who’s sort of the Carl Wilson of the Bush family dynasty.

Still, the tremendous reaction to Paul’s speech suggests that while he may not be as principled as his father Ron, he might be a far shrewder politician. The fact that a Republican can deliver a 13-hour speech that draws praise from Bill Maher and Jon Stewart while angering John McCain and Lindsey Graham hints that Paul may have some sort of strange and unprecedented cross-platform appeal.

“For now he remains a riddle wrapped in a mystery inside an enigma swaddled in the Constitution.”

The filibuster was technically aimed to delay the nomination of new CIA Chief William Brennan, but it focused specifically on a leaked Department of Justice white paper that raised the question of “imminence” and whether the feds had the right to use drones to kill American citizens within US borders if they felt someone posed an imminent threat to national security. Paul said that Barack Obama had made comments suggesting such a right existed. Paul said he’d also hectored Attorney General Eric Holder and his egregiously obnoxious mustache whether such a right existed but that Holder’s responses were evasive.

Paul said that just as the feds have continually expanded their definition of what exactly constitutes a “terrorist,” he expressed concern that they would expand the neocon illusion that America is engaged in a “perpetual war” against terrorism to the point where the battlefield extended into American soil:

During the course of his 13-hour exposition he cited Friedrich Hayek and the mighty Lysander Spooner as well as sundry modern bloggers and pundits. He was careful to praise Martin Luther King while condemning Jim Crow laws and calling Adolf Hitler a bad, bad, bad, bad, evil man. After thirteen hours he could maintain bladder control no longer, which astounds me since I can rarely last thirteen minutes.

Twitter exploded with over a million Tweets during Paul’s marathon, leading to the creation of the hashtag #StandWithRand. His performance earned the expected praise from Tea Party and libertarian types as well as mainstream right-wing stalwarts such as Matt Drudge, Michelle Malkin, Rush Limbaugh, and breitbart.com.