Where Grandparents Go to Die 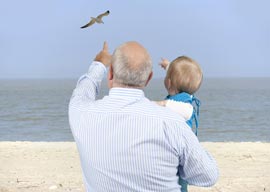 My goddaughter was Face Timing with her grandfather the other day and there was something eerily magical about the way he spoke to her. He’s been having a hard time recently. Dollar General called the cops because he was wandering around the store for hours complaining about his keys. He didn”t know how to get out of the store and couldn”t fathom driving his car home. When I speak to him I understand maybe a tenth of what he says. He speaks in gibberish and ends every sentence with, “Follow?” On this call however, his eyes had a different look. He was lucid and smart. He often forgets his children’s names but he remembered my goddaughter and her sister’s name right out of the gate and quickly recalled details about their lives. He was happy and funny and laughed at the right times like a normal person. I”ve never seen him like that before. His son, the girls” father, was stunned.

A few days later, his son called him back to discuss it. His father had no idea what he was talking about. This was not a solitary incident. Without fail, this 85-year-old man is at his most lucid when he is talking to his grandchildren. I”ve noticed this too. My grandmother in Scotland recently died at 97. I called her every Sunday for decades. Since my children were born the conversation would always go to “How are my babies?” within the first 60 seconds. I”d relay some anecdote about her grandchildren and she”d laugh the way I remember her laughing my entire life. She”d always get serious after and add sternly, “You need to write these things down. I forget all the things Loraine and Strachan [her children] said.”

“Baby boomers are some of the least invested grandparents in history.”

I opened a Gmail account for my kids and email into it every funny thing they say so that they can look back on them later. It’s just as much out of respect for her as it is for them. When I talked to my uncle about our calls he was always confused. The woman he saw at the retirement home was “a skull with two wee eyes peering out of it.” Sometimes she said nothing to anyone for days. She had a colostomy bag and a catheter and hated them both so much, she would eat just enough to stay alive but not enough to enable a changing. They put a “do not resuscitate” sign on her door but her food and water system worked for months and months. Like a typical Scot, she beat the system right up until the end. I didn”t see her in her final year but the people who were around her told me she was a different person when I would call. Something about “her babies” made her come to life. When she got so bad she couldn”t come to the phone, I had to switch to letters but I took too long to do that and she died. It’s possible the lack of communication killed her. The lack of letters was like an invisible letter telling her to die. I finally got around to it a few months after she had become impossible to speak with over the telephone. A week after she died, my letter came back. I got the postage wrong. The elderly often wait until the holidays to die so they can see the family one last time. Did I murder her? What’s even more haunting than that is the possibility it was the right thing to do. She was already dead outside of that twenty-minute conversation we had every Sunday.

However, what if she had been around her grandchildren 24 hours a day? What if my goddaughters were lighting up the face of their grandfather every day? Studies show that Alzheimer’s and senility are thwarted by the appearance of grandchildren. Grandparents who babysit are much less likely to develop the disease. This is an evolutionary trait that makes perfect sense. When a woman learns she is pregnant, she is excited but also concerned. This is a big responsibility. When a grandmother learns her daughter is pregnant, she get so excited she pees her pants. Check out the videos on YouTube. It’s grannies gone wild. It’s good for a couple to have two kids. That gets a passing grade in evolution but having grandchildren means you hit it out of the park. You continued the species in a consequential way. That’s what we”re here for. That’s the meaning of life.