Where Have All the Leaders Gone? 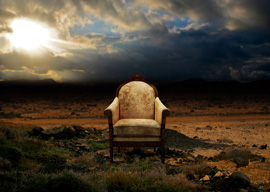 The two major national party conventions trotted out this year’s brightest and best as if they were displaying prize pigs at a county fair. Highlights included Clint Eastwood haranguing an empty chair and Obama getting a character reference from the most noted perjurer and adulterer ever to occupy the White House.

Whichever candidate wins, billions will have been spent getting him there. Voters will again comfort themselves that they voted for the lesser evil. The beat will go on to ruin: continued economic collapse, demographic implosion, war abroad, and social, cultural, and moral decay at home”with neither party able nor willing to combat the evils from which they benefit.

Grim as the picture appears at the national level, state and local politics are as bad or worse. My own undead Governor Brown, Chicago’s now mercifully retired Daley, Jr., and Philadelphia’s gutless wonder, Frank Rizzo, Jr. are all samples of once-great political dynasties gone to bad seed.

On some deeply instinctual level, most of us”regardless of political views”have a feeling that something, some life force, has gone out of public and private life.

“When I was a boy, the world was filled with leaders.”

What is that force? Leadership. When I was a boy, the world was filled with leaders”reigning or recently retired”who epitomized their countries. De Gaulle, Churchill, Adenauer, De Gasperi, Chiang Kai-shek, Franco, Salazar, De Valera, Pinochet, Sato, PerÃ³n, Menzies, Diefenbaker, and even the UN’s HammarskjÃ¶ld. Whether in office through the ballot box or a coup, these lads guided their lands through perilous times. In my time, the closest we came on a national level was Ronald Reagan, a giant among the pygmies of late-20th-century presidents. All these leaders were able and memorable.

There are several reasons why neither ballot boxes nor military coups create such folk today. The first is our culture’s abandonment of the aristocratic principle. With the exception of Reagan (who nevertheless could play the part), all of these men came from the higher ranks of society. By itself that means nothing, or Paris Hilton would make a fine president. But in the period which produced these leaders, the strata from which they sprung held up certain ideals to its members: chivalry, noblesse oblige, gentlemanly behavior, courtesy, and self-sacrifice“phrases which now are held to be laughable slogans with which the rich of old covered their greed.

Another problem is education. Westerners today of all classes are incredibly ignorant. Because of the Internet, this should be the great age of the autodidact. But without the skills acquired from a decent education, and with no real will to learn, we usually comfort ourselves with our favorite blogs and profit little from what is easily available.

Although most people ignore the world’s great digitized libraries, at least they love Internet gossip. Imagine if such stuff had existed during World War II. Winnie’s background and peccadilloes would have bounced him out of the running for Downing Street as soon as TMZ got ahold of them. Evils are often exposed in this manner, but good is frequently stifled as well. After the media laughed itself silly over Prince Harry’s naked posterior, the Prince has gone on to risk said posterior in Afghanistan, where some of the locals are looking to give him a special welcome. Few of the media (save field reporters) would take such chances with their own precious skins.