Where Have All the Workers Gone? 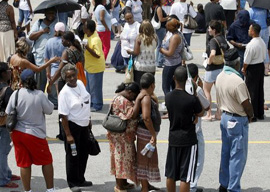 That America created only 88,000 jobs in March, less than half the number anticipated, was jolting news, indicating the recovery that the White House has boasted about may not be at hand.

But in that March jobs report, there was more disturbing news. While unemployment fell to 7.6 percent, the reason it fell is alarming.

Half a million U.S. workers (495,000) disappeared from the labor force. They dropped out. They are no longer even looking for a job.

Worse, this appears to be an inexorable trend. The participation rate of eligible workers in the United States has fallen to 63.3 percent, a level unseen since Jimmy Carter gave his malaise speech in 1979.

These folks, who have quit working and quit looking, who are they? How do they support themselves? What does this surging dropout rate from the workforce portend for America’s future?

“From the Jamestown colony to the 20th century, America was a self-sufficient society in which all understand St. Paul’s epistle to the Thessalonians, “He who does not work, neither shall he eat.”“

Disproportionately, the dropouts are young, black, Hispanic, female, working class. Some have gone home to live with their parents and may have re-enrolled in school to re-enter the job market better prepared. But other indices are troubling.

Though we have been creating jobs for two years, even if at a torpid pace, the food stamps rolls have soared to 47 million at a cost of $80 billion. When George W. Bush departed, 31 million Americans were on food stamps. Fifty years ago, there was no food stamp program. Yet, now more than one in seven Americans is fed by government.

In another shocking number, almost 9 million Americans ages 20 to 64 years old—nearly 5 percent of the working-age population—is receiving disability pay. Among workers 55 to 64, 10 percent are on disability. Few of those folks will ever enter the job market again.

In 1971, only 1.5 percent of U.S. workers were on disability. Yet, today’s workplace is a less hazardous and safer place than it was back when manufacturing was a far larger factor in the economy.

Other questions are raised by the Friday numbers released by the Bureau of Labor Statistics.

Why is Asian unemployment 5 percent, while the Hispanic rate is more than 9 percent and the African-American rate more than 13 percent?

Do Asian-Americans and Asian immigrants have a superior work ethic or superior capacities for work and success in a post-industrial economy?

And with 14 percent of the U.S. labor force unemployed, underemployed or having quit looking for work, why is Congress about to grant amnesty to 12 million illegal aliens who are taking and doing jobs that might otherwise go to unemployed Americans?

Patriotism argues that we enforce the laws against businesses that hire illegals and declare a time-out on handing out a million green cards every year to foreign folks to come here and work, until our own fellow countrymen are fully employed.