Which Holocaust Did You Mean? 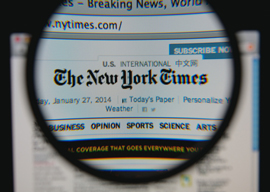 I wagered a Takimag writer that the New York Times and its international excuse for a newspaper would report on anti-Semitism in Europe the minute the civilian dead in Gaza reached 1000. I won the bet exactly two days after I made it, and two days after the glorious Israeli army managed to kill 1000 Palestinians, mostly women and children in Gaza.

Celestine Bohlen, the Paris-based reporter for the Times, was obviously brownnosing the boss back home when she went looking for Rabbi Salomon Malka in the Paris suburb of Sarcelles, often called “little Jerusalem” because it’s home to 15,000 Jews. Pro-Palestinian demonstrators, as Bohlen described them, have been causing trouble in little Jerusalem, setting fires to a kosher grocery shop and a Jewish-owned pharmacy. Something that slipped the reporter’s mind, at least at the start of her diatribe, was the fact that the demonstrators were all Muslim youths outraged at the fact that American-made F-16s, 155mm heavy artillery, and thousands of Israeli commandos were laying further waste to the wasteland that is Gaza, murdering along the way unarmed men, women, and children.

“Yes, it is unpleasant and certainly uncivilized, and it has no place in a European country, but nor is there any place for the fact that Israel kills Palestinians in cold blood for 66 years and excuses itself by calling anyone who opposes its illegal occupation of Palestinian lands a terrorist.”

But that’s not the way the story was reported. According to the New York Times and Celestine Bohlen, the demonstrations were proof that anti-Semitism is rampant in Europe, implying that steps need to be taken to prevent another Holocaust. According to Rabbi Malka, the attacks on Gaza have given an anti-Zionist cover to attacks against Jews. Period. “Anti-Semitism today is hiding behind anti-Zionism,” says the rabbi and reports the Times. Rabbi Malka was from Morocco, a country that had a large Jewish population and a reputation for tolerance. Less so after Israel began its war against the Palestinians 66 years ago. Many Moroccan Jews left for Israel, but many also chose France, a tolerant country that enjoys a reputation for its freedom of speech.

Mind you, the Jewish Defense League did not exactly take all this lying down. After helping get the government to ban two Palestinian demonstrations against the Gaza massacres by Israel”an unheard-of ukase by a French government that prides itself on the freedoms it allows minorities”the JDL attacked the Palestinian rally that took place despite the ban. Now the rabbi is saying “It’s unimaginable” that anyone would cry out anti-Jewish slogans in front of a French synagogue.

Yes, it is unpleasant and certainly uncivilized, and it has no place in a European country, but nor is there any place for the fact that Israel kills Palestinians in cold blood for 66 years and excuses itself by calling anyone who opposes its illegal occupation of Palestinian lands a terrorist. In the meantime I have won my bet and am off to the races to put my winnings on a horse. Celestine Bohlen obviously is waiting by the telephone for a call from New York telling her bravo, she managed to bring people’s minds back to what really matters, anti-Semitism rather than those boring dead women and children in Gaza.