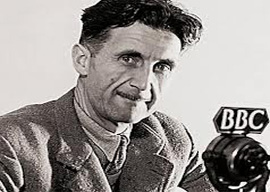 The BBC has just rejected a proposal to erect a statue in honor of George Orwell outside its new London headquarters.

The reason? As the nation’s public broadcaster, the BBC is supposed to be unbiased and objective, so to erect such a statue would be regarded as “far too left-wing.”

That is what the BBC’s Mark Thompson apparently told Lady Joan Bakewell, a former BBC presenter and Labour member of the House of Lords, who had proposed the idea backed by a consortium of her radical-chic friends.

Yes, George Orwell was a socialist, but above all he believed in liberty. He was well aware that the trouble with socialism is that it leads inevitably to tyranny.

If Orwell were alive today he would despise the modern left, especially for its doctrine of political correctness, which denies freedom of speech and via the state inflicts on our lives numerous petty tyrannies.

“If Orwell were alive today he would despise the modern left, especially for its doctrine of political correctness.”

He was one of the few on the left in the 1930s and 1940s honest enough to admit that Hitler’s National Socialism and Mussolini’s fascism were desired by Germans and Italians rather than imposed on them, and that the left needed to reflect long and hard on the reasons for this if it wanted power. Mussolini understood this, which is why in 1914 he abandoned revolutionary socialism. World War I led him to realize that people were more loyal to country than to class.

Orwell was also one of the few to admit that both National Socialism and fascism were left-wing rather than right-wing movements. Each had more in common with communism than they did with capitalism. So the Nazi-Soviet pact that endured until 1941 was a far more natural military alliance than the subsequent one between the communist Stalin and the capitalists Roosevelt and Churchill.

Yet to this day the left”which commands the citadels of Western culture as German Marxist Rudi Dutschke urged it to do”insists that the terms “Nazi,” “fascist,” and “right wing” remain synonymous.

For decades now, the BBC has leaned further left than CNN. So for evidence of its blatant left-wing bias you do not need a statue, because a working television will suffice. But George Orwell is adored just as much, if not more, by the right as the left”and for very simple reasons. He was a socialist who saw through socialism and its inherent dangers. Unlike so many on the left who were and are so willing to sacrifice freedom, honesty, and truth in the name of their cause, he revered all three as sacred.

Orwell wanted to destroy capitalism by revolution. His early works such as The Road to Wigan Pier drew attention to the misery and poverty of Britain’s poor. But it is for his last two works, Animal Farm and Nineteen Eighty-Four, that he is regarded as among the 20th century’s most important authors. Both of these masterpieces are warnings about the dangers of revolution and totalitarianism, and how the twisting of truth into lies (and vice versa) is its vital component. It was Orwell who created the phrase “Big Brother is watching you,” which Big Brother did via television.