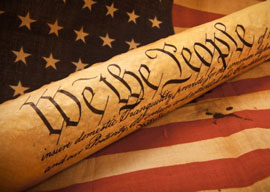 Retired SCOTUS Justice John Paul Stevens wants to amend the U.S. Constitution, I see. The old boy”he’s just turned 94″has a book out in which he proposes six amendments. You can read about them at that first link; or hey, buy the book.

I want to play this game. True, I don”t have the jurisprudential expertise of a bloke who warmed a SCOTUS seat for 35 years; but, like Charles the First, “I know as much law as any gentleman in England,” so I”ll take a shot at some constitutional amendments of my own. Let’s see if we can get some petitions going here.

1.  Requiring that congressional and state legislative districts be “compact and composed of contiguous territory” to stop both parties from carving out safe seats.

That’s a cheat.  I”ve taken it verbatim from Justice Stevens” own list.  It’s the only one of his that I heartily agree with.

Here they are, those convoluted congressional districts you”ve probably seen, gerrymandered to maximize the advantage of whoever’s in power when the lines get drawn.

“If Congress can”t find one federal officeholder to impeach in five years, they”re not paying attention.”

Within the limits imposed by geography (coastlines, state borders), congressional districts should meet some minimum standard of convexity. And yes, convexity can be quantified: there’s a whole mathematical theory to work from.

Can the Constitution tell states how to draw their legislative districts, though? If the judge guy thinks it can, I guess it can. We just crossed the boundaries of my own constitutional knowledge. Next!

Rather than blanket limits, I”d put in a “filter” so that very capable persons could serve multiple terms. Something like this, perhaps: first-past-the-post as the default rule, but any candidate standing for re-election to an n-th term (n > 1) must win at least fraction n/(n+1) of votes cast, or be disqualified. You want a fifth term? Win five-sixths of the votes.

3.  Withholding the vote in federal elections from all civilian federal employees.

This is elementary. If government’s your living, of course you”ll want more government. Why do you think six of the nation’s ten richest counties are in the Washington, D.C. commuter zone?

You say universal suffrage is a treasured and hard-won feature of our democracy? All right; but I”m not denying the vote to women, blacks, or aborigines. I”m denying it to forest rangers, federal judges, and GS-15s in the Department of Administrative Affairs. If they don”t like it, let “em get jobs in the private sector.

4.  Ending all federal recognition of Indian tribes (or any other tribes) . . .

. . . and transferring title to their reservation lands, in equal portions, to the people living there at the date the amendment is drafted.

What is the case for federal assistance to education? NIH grants fund academic research? So fund it off-campus. Poor kids won”t get schooled? Is that really something states can”t manage? Poorer states will have inferior schools? “There is a lack of consistent evidence on whether education expenditures are related to academic achievement.”

That should extend to federal assistance for students. You want a loan for college, go ask your bank.