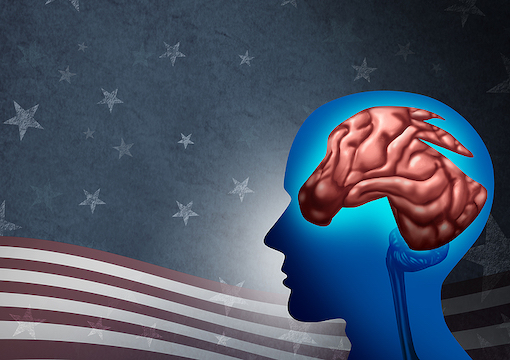 Over the years I’ve devoted a lot of text in this column to the “perpetrators” of America’s decline. The “intellectuals,” the billionaire donors, the think-tankers. But it’s important to remember that there’s just so much the perpetrators can do without the ground-level true believers.

I was reminded of this a few nights ago watching Tucker Carlson. Tuck’s the chimpanzee of rightist punditry. You know how they say humans and chimps are nearly 99% similar in their DNA? But that missing 1% makes all the difference; it’s why humans can write symphonies and chimps can fling poo (though humans can do the latter as well, especially in San Francisco).

Tuck is always 99% close to the truth, but the 1% he misses is significant.

So last week there was Tuck railing about how the nation is being guided to destruction by “ideologues”; how clueless Joe Biden is having his strings pulled by “ideologues” and “utopians” with “fancy theories.”

Tuck used the word “ideologue” fourteen times in his rant (it must’ve been on his word-of-the-day calendar).

But is he right? I’m skeptical. I’m not certain the “puppet masters” are necessarily “ideologues.” Take George Soros, for example. Listen to any of his speeches and you’ll notice a theme: He’s obsessively driven by bitterness over his father’s “humiliation” by Nazis and Hungarian fascists during WWII (his father, a prominent lawyer, was driven out of his profession and forced into hiding). It confuses some on the right when Soros refers to his youth under Nazi occupation as “the happiest time of my life” and “a positive experience.” Just as any leftist would, rightists hear those words and unthinkingly go straight to “A-ha! He admits it! He’s a Nazi!”

But is genuine comprehension ever achieved by screaming “Nazi”? If you want to truly understand a “puppet master” like Soros, then understand why he describes the occupation years as “happy.”

Soros’ father spent those days outsmarting Nazis by faking documents to help Jews go into hiding and avoid deportation to Auschwitz. What Soros means with his “happiest days” comments is that he got to witness his dad, the man he looked up to above all others, gaming the system to fight Nazis.

This is what continues to define Soros: his rage over seeing his father humiliated by gentiles, and his pleasure at seeing his father manipulate the system to fight back and win. To that extent, it’s likely not accurate to say that Soros is driven by “ideology.” It’s really more of a personal grudge, a lifetime spent avenging his father’s mistreatment and trying to top his dad’s successes at defeating “white Christian oppressors.”

I’ll phrase it like this: If a fat unattractive guy who’s also a narcissist (Christ, I know a couple of those) gets turned down by every pretty girl in high school…if, in fact, he’s not just turned down but humiliated by those girls, and he grows up, comes into money, and decides to use it to, say, pay attractive women to be defecated on as he gets off on their humiliation, is that ideological misogyny?

I would say no. I would say that isn’t ideological at all. It’s personal; it’s revenge.

What Tucker-chimp gets backwards is that the “ideologues and utopians” aren’t necessarily the ones at the top slinging the bullshit; they’re the ones down below lapping it up. If the true believers were always the ones at the top, every Soviet commissar would’ve lived humbly like a good proletarian, eating just enough “bread” to stay alive, but never indulging in bourgeois comforts or Western excesses.

And today’s billionaire leftists would be welcoming Haitian immigrants into their gated communities.

Don’t look for the ideologues at the top. Look for them next door.

Four years ago, I wrote about an intriguing quirk in the leftist personality. For the average secular leftist, government spending takes the place of prayer, in that leftists advocate it not expecting proof that it works; it simply makes them feel good to do it, because they’re certain it must be accomplishing something. It’s faith. No real Christian prays for a BMW to appear in their driveway and then runs to the window and when there’s no car, they renounce Jesus. Prayer is more a matter of personal comfort and the knowledge that it’s creating goodness and positivity in ways you might not explicitly understand.

And that’s how leftists see spending. That’s why, during the Obama years, it never worked when conservatives would confront leftists about earmarks in the stimulus plan. “Explain to me how $1,800,000 for pig odor research will help the economy?”

Leftists were merely content that money was being spent. Their faith dictates that as long as you keep spending (praying), good will ensue. To demand immediate discernible results is to challenge that faith (“I prayed for a BMW! Where’s the fuckin’ car, Jesus?”).

In 2009 a controversy erupted when then Louisiana governor Bobby Jindal (remember when he was a “rising GOP star”?) objected to millions of dollars in stimulus money going to “volcano monitoring.” Jindal’s point (and he was correct) was that volcano monitoring is already provided for in the USGS annual budget. Obama had promised that every cent of the stimulus would go toward job creation. In what way would those extra millions for volcano monitoring do that? The USGS budget was already sufficiently large that there were likely no unemployed U.S. volcano monitors.

Leftist politicians and their media pit-bulls ridiculed Jindal: “Trust us, that money will create jobs. We need to spend!”

Over a year after the stimulus bill’s passage, I reached out to everyone in the press who’d mocked Jindal and I asked, “Okay, it’s been fourteen months. How many jobs were created by the volcano money?”

Those who replied—Mother Jones editor Nick Baumann, Tim Leavitt (then mayor of Vancouver, Wash.), Georgia Tech professor and CNN analyst Thomas Boston, and USGS spokesperson Clarice Ransom, gave me the exact same answer, paraphrased here as “Durrrr, no idea, but at least we spent, and that’s what matters.”

Just have faith. To expect instant gratification is to make demands of God, and that’s blasphemy.

In my piece four years ago, I detailed my interaction with L.A. Times editor Paul Thornton in the aftermath of the deadly 2015 Philly Amtrak derailment. Thornton had moaned in an op-ed that the crash had been caused by “lack of spending.” I told him that based on his own paper’s reporting, the crash had been caused by regulatory hurdles and land-rights issues that had delayed implementation of an already bought-and-paid-for safety system; money wasn’t the issue at all.

His faith had been challenged.

Of course, most congresspeople—the ones who do the spending—don’t have this faith-based approach. They spend cynically, to bring pork to their districts and enrich lobbyists and themselves. But they depend on the commoners to be the true believers in the all-healing power of check-writing.

Once we establish that this is how leftists view spending, how the “puppet masters” manipulate it, and why rightist demands for verifiable results don’t have any effect on the faithful, we now have to understand something else: The nation has always survived massive spending. Everybody spends; GOP presidents, Dem presidents, GOP Congresses, Dem Congresses. It’s not good, but it’s not our doom.

DEI (“diversity, equity, and inclusion”) is. And what the people at the top, the civilization destroyers like Soros, have been able to do is harness that diseased spot in the leftist brain, the one that releases endorphins at the mere mention of spending, and redirect it to something new. The idea is, take the anxiety that leftists feel about lack of spending (long before race became the Dems’ cause célèbre, GOPs like Reagan and Gingrich were being called Hitler for cutting spending), and make them feel the same way about lack of “diversity.”

“We’re not spending $10 trillion dollars? Bad things will befall us! We must spend, even if I can’t articulate how that money will stave off Armageddon.”

“Too many white people in a boardroom or a movie? Not enough black women in STEM? No bare-assed Peruvian Tzaltapectatl Indians in the ballet company? I’m overcome with a feeling of impending doom! We must diversify, even if I can’t articulate how putting low-IQ incompetents on a cancer research team will actually help.”

The same way rightist arguments against spending never resonated because the act of spending is in and of itself emotionally fulfilling so leftists don’t require actual results, ditto the arguments against DEI. You can try to rationally explain that things don’t automatically become better just because there’s a “POC” in the room, and, indeed, things get worse when the slow or unprepared are elevated beyond their capabilities, but those critiques will fall on deaf ears.

As with reckless spending, demanding “diversity” releases endorphins, pleasing and calming the leftist mind. Leftists have been conditioned to believe that white equals doom, “diverse” (nonwhite) equals safety. It’s no more logical than most religions, but I’m hesitant to call it a religion. Even though I did describe spending as the leftist version of prayer, I think it’s a little too fancy-pants to describe these things as pseudo-religions.

I think they’re more accurately described as compulsions. I have many leftist friends, and not a one of ’em isn’t in therapy or on some type of anti-OCD, antidepression, antianxiety, or antipsychotic med. The feeling of impending doom leftists get when a spending cut is proposed or when a room is too white is best compared to the feeling of doom people with OCD get when they don’t turn off the light switch four times in a row or when objects on a table aren’t symmetrical. You can’t talk them out of that feeling of doom, because it’s by definition irrational.

Haven’t we seen this pathology present itself in leftists since the beginning of Covid? Irrational fears and compulsions, divorced from science, exploited by political leaders.

Leftists masking toddlers, leftists wearing masks while alone in their own cars, vaxxed leftists walking solo on a beach in masks? That’s OCD. The terror that leftists have been conditioned to feel (conditioned by manipulators who are happy to go maskless when they don’t think anyone’s watching) when seeing an unmasked person is the same terror they’ve been conditioned to feel when seeing anything that’s too “white.” In a way, none of it is necessarily ideological. Not on the part of the people at the top who are more exploiters than true believers, and not on the part of the people at ground level who’ve had their brain disorders exploited.

To be sure, there are genuine ideologues. They write books, they teach classes. But they’re not the engine that drives the nation’s destruction. Those at the top who manipulate, and those at the bottom who have manipulable disorders, are far more important. The former have money and power, the latter have numbers and fervor.

Next week: how some on the right are helping these monsters and lunatics win.