White Supremacy Kills—Even When the Shooters Are Black 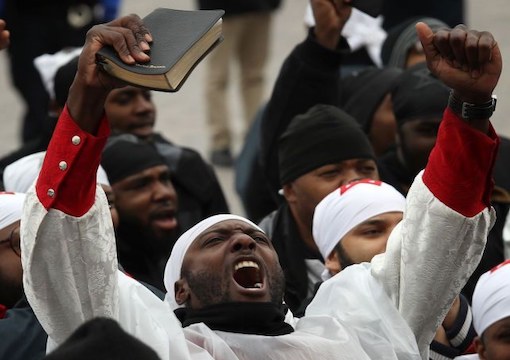 The Black Hebrew Israelites are the Rodney Dangerfield of hate groups—I’m tellin’ ya, they can’t get no respect.

In DC this past January, after they diligently taunted some white Catholic kids from Kentucky for an hour about being cracker faggot organ-harvesting incest babies before the white youths did what any group of bloodthirsty young Nazis would do and started chanting school-pride songs, naturally it was the white kids got credit and tons of attention for being racists. The black man, as always, got nothing.

And last week, after a black couple stormed into a kosher grocery store in Jersey City with long rifles, killing three people before police shot them cold, the story dropped out of the news cycle after it was revealed that the male half of the killer duo had been affiliated with the Black Hebrew Israelites.

When will our racist media finally give black supremacists the credit they deserve?

The assailants who barged into the Jersey City Kosher Supermarket were identified as 47-year-old David Anderson and his girlfriend, 50-year-old Francine Graham, whom a neighbor says used to be nice but transformed into a “dark person” once she got involved with Anderson.

Along with a live pipe bomb and ammunition, police found a note in the couple’s stolen white U-Haul van on which Anderson had written:

I do this because my creator makes me do this and I hate who he hates.

Police also tracked down social-media posts Anderson had written under the handle “Dawada Maqabath” attacking police, Jews, and probably even Jewish police and police who act like Jews. He referred to Jews—at least the people that most of us refer to as “Jews”—as “imposters” and posted something a mere four months ago that suggests he was strongly familiar with Black Hebrew Israelite terminology (reprinted unedited):

These police are NOT scared, they are carrying out a well planned agenda layed out by the upper echelon of Rosenbergs people. Esau and Jacob, God and the devil playing out in front of your very eyes but the valley of the dry bones refuses to be resurrected. A war that has NO end. Selah.

I first became aware of the Black Hebrew Israelites in the early 1990s when a friend emailed me a videotape of those goofy bastards dressed in their fruity S&M/Arabian Nights outfits standing in Times Square and barking at white people about how they were all evil faggots who were going to be enslaved once the kingdom of the True Black Jews is restored on this earth.

“When will our racist media finally give black supremacists the credit they deserve?”

One scene on that tape was so unsettling that I honestly wondered whether it would spark a race war if it were to get widespread exposure—this gaggle of bearded, guffawing, tar-black ghetto ’tards exploited the kind and ultimately naïve anti-racist intentions of a middle-aged white lady by convincing her that the Bible says if she really loves black people, she has to prove it by licking the bottom of one of the simian fake Israelites’ KISS-sized black boots. Trust me, you don’t want to be licking anything that’s been standing on Times Square. But lick it she did, then shrugged and walked away sheepishly as they all guffawed at her gullibility.

Despite their cruelty, and despite the fact that they would probably slit my throat if they could get away with it, I came to admire their flair for the dramatic. Just as they have a penchant for bold fashion statements, so do they have a knack for baiting people racially:

After the race war, you’re going to be my slave, picking cotton in my field!

Will so-called white people go to heaven? Yes! In slavery!

Black women, you think it’s OK to take your sons to a beauty parlor, where they’ll grow up thinking it’s OK to be like a woman. It’s not. They need to be with men, so they don’t grow up and turn into a fag!

Hu-man is a combination of hue and man. You have no hue, no color, so you’re not human! That’s why you can’t absorb the sun and you need vitamins!

As if my week wasn’t already bad enough, there they go again with the vitamin-shaming.

The world’s first murmur of Black Hebrew Israelism is thought to have erupted in the beautiful little mountain town of Chattanooga, TN in 1886. A black man named Frank Cherry started a “Black Jew” church and prophesied that Black Jesus would return to planet Earth—which he said is square, not round—and kill all the white people in the year 2000.

There is no Black Hebrew Israelite Pope and no central governing board. The doctrinal linchpin—sorry, couldn’t resist using a word that sounds like “lynch”—that connects various organizations such as the House of Israel, the Nation of Yahweh, the Israelite Church of God in Jesus, and the Israelite School of Universal Practical Knowledge is the belief that American blacks are literally the dispersed biblical twelve tribes of Israel.

They preach that after the Romans routed the Jews in 70AD, somehow the Jews were able to vamoose to West Africa but were eventually sold into slavery by “continental Africans,” whom Black Hebrew Israelites view as wicked traitors. Instead of Levi, Judah, Benjamin, and the rest, they teach that the real twelve tribes are dark-skinned groups such as Puerto Ricans, Haitians, Jamaicans, etc.

To them, nearly everyone except them is a faggot and a phony. They have a tendency to use the term “so-called,” as in “so-called white man, so-called black man, and so-called Jews.” They believe that one day Jesus will return and put the fake Jews—in other words, the real Jews, please try to keep up—and the whites into eternal bondage to the only legitimate heirs to Abraham, Isaac, and David, which as everyone knows but is too chickenshit to admit, consists of a bunch of unemployable fat bearded black losers who live in leaky basements in the Bushwick section of Brooklyn.

By far the ideology’s most infamous sect was the Miami-based Nation of Yahweh, whose founder called himself Yahweh Ben Yahweh and urged new members in the late 1980s to “kill me a white devil and bring me an ear.” The group was connected with at least 14 racially motivated murders before their leader was imprisoned.

Fourteen racially motivated murders? I mean, one girl died in Charlottesville, but she was white and so was the guy who drove the car into the crowd. But fourteen? How many generations has it been since the Klan racked up fourteen corpses? Why isn’t the Nation of Yahweh a household name?

It is unclear what sort of despair led David Anderson to seek solace in the Black Hebrew Israelites’ lunatic doctrines. But it turns out that he and his girlfriend may not only be mass murderers—it’s likely that they are also serial killers.

An hour before the onslaught at the kosher market and a mere mile away, a policeman was shot dead in a cemetery. He had approached a stolen white U-Haul van that was suspected to have been involved in a shooting death of a white Uber driver the previous weekend.

After the dust had settled at the kosher market, authorities confirmed that one of the weapons had also been used to kill the limo driver.

An hour after the cemetery shooting, surveillance footage shows the U-Haul van pulling up across the street from the kosher market. Anderson and Graham walk out of the van and straight into the market, rifles hoisted.

An hour later, after an intense gun battle involving helicopters and cordoned-off streets, two Orthodox Jews were dead. So was a Hispanic market worker. And so were Anderson and Graham, felled by police bullets.

The usual suspects found a way to blame white people for it all, anyway.

A full day after the shooters’ identities had been revealed, Rep. Rashida Tlaib tweeted:

This is heartbreaking. White supremacy kills.
After apparently being informed that black supremacists were the killers this time around, Tlaib deleted the tweet, no apologies, no explanations.

The astoundingly charmless Mark Potok of the Southern Poverty Law Center—who looks like a homeless puppy who’s been shivering in the rain for 100 years—insinuated that the Black Hebrew Israelites lifted their whole shtick from the Christian Identity movement, which tries to argue that Northern European peoples are actually the real twelve tribes of Israel:

Perhaps the most bizarre thing about Black Hebrew Israelism is the way it mirrors, with only a change in color, the ideas of Christian Identity.

No, the most bizarre thing is that Christian Identity ideology didn’t emerge until the 1920s—about forty years after the first “Black Jew” church opened in Chattanooga. Apparently, Mark Potok is reluctant to give black people credit where it’s due.

Can’t these people just let blacks be supreme for once?