White Devils for a Free Africa 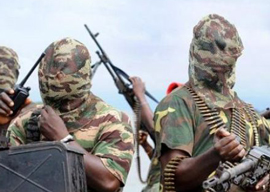 I write this while American unmanned flights and 18 American “specialists” are looking for those 200 unfortunate girls abducted by Boko Haram, a group our very own Hillary Clinton had refused to place on a terrorist watch list of the State Department. Boko Haram is as bad as it gets and as violent as it can be, but it’s no different from al-Nusra Front or ISIS, fighting in Syria against the government of Bashar al-Assad. What unites all three is their anti-Christianity, but don”t look for that while watching TV or reading the newspapers. Killing Christians and burning down Christian churches is the main business of Boko Haram, but for some strange reason no one in the Christian west is zeroing in on it, certainly not the New York Times or the Washington Post, and none of the main TV networks. The fact that it’s black African Muslims killing black African Christians still seems too sensitive an issue in our race conscious media, as if black on black crime is somehow a lesser evil than white on black crime, a real no-no.

Let’s face it, it is instant hara-kiri for any public person today to mention the so-called warrior gene”MAOA-2R”one that has been linked to violent behavior in men abused as children and is more common in blacks than whites. Mention that gene and you go the way of Nick the Greek”a TV pundit who wasn”t Greek at all but used to set the odds before football games”who said that black people’s muscularity was not conducive to helping them become champion swimmers. He was fired forthwith and never heard from again. (Incidentally, have you ever seen a great black swimmer? I haven”t, but maybe I”m colorblind.)

“Let’s face it, it is instant hara-kiri for any public person today to mention the so-called warrior gene”MAOA-2R”one that has been linked to violent behavior in men abused as children and is more common in blacks than whites.”

Social institutions and culture explain why Europeans are superior to, say, Middle Easterners and Africans, or so say scholars like Francis Fukuyama. I think it’s Islam and race that keep them down. Why is it that more books are published in Spain in one year than all the books published in the Middle East since time began? Don”t reach for the Google button. It’s Islam, stupid. That and the propensity to violence of the MAOA 2R variant. Mind you, the latest horror in Nigeria does not absolve the Christian rulers, such as that Christian con man posing as a good guy, president Goodluck Jonathan, as corrupt a leader as Mugabe and that’s really saying something.

So, don”t just wait and pray, dear readers, that some white knights from Special Forces or the British SAS will suddenly find the girls and set them free to a glorious future. Nigeria is the most populous country in Africa where 350 tribes speak 250 languages. Yes, 350 tribes speaking 250 languages, and without intending a pun, the problem is hardly black and white. Nigeria is, statistically, the richest country in Africa, but its oil and gas wealth is pillaged by a tiny ruling minority elite, one you sometimes see flying in first class covered in jewels and laughing rather loudly. Another way of recognizing this tiny elite group is by their weight. Every man, woman, and child is very, very overweight. And, I hate to admit, most likely of the Christian persuasion.

Which brings me to the real problem of Africa in general and Nigeria in particular. There is not a single institution that functions properly in Nigeria or in Africa, the few that do being leftovers from white rule in South Africa. The Nigerian army is totally corrupt, vastly underpaid, and indistinguishable from the terrorists, as are the civil service and the judiciary. Yet we in the West expect democracy in Africa to function as if it were Switzerland. At least this is how our civil servants and diplomats react when an atrocity such as the kidnapping and sale of girls for ten dollars each takes place. The great kleptocracy of Nigeria’s oil wealth is the only institution that functions perfectly in Africa, no ifs or buts about it. This is what Michele Obama should have said after the outrage, rather than turning it into a feminist issue. But I”m whistling Dixie, as old Bing Crosby used to say.

What is to be done? Absolutely nothing, I”m afraid, unless, unless, we re-imperialize Africa and this time play it straight. Not very practical, I admit, but such is the misery African rulers have imposed on their hapless minions, it’s worth a think through. Remake the map according to tribes and customs, install Western-trained, honest civil servants and oversee fair election after a decent time frame. But now I”m really whistling Dixie, and some pundits might even go as far as calling me a racist. Be that as it may. Africa will continue to be the suffering center of the world until someone someday sees the light and takes charge. My last advice is don”t hold your breath.