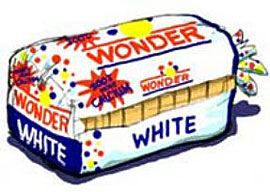 In 2002, on the tenth anniversary of the Rodney King riots, I drove down to the intersection of Florence and Normandie in South-Central LA where all hell had broken loose. To see if the locals were suffering from a “food desert,” I stopped at a nearby supermarket. Yet the main difference from a suburban supermarket was found not in the fresh produce section but in the bread aisle: The good folks of the ‘hood would only buy white bread, such as Wonder Bread.

That struck me as curious because it didn’t fit the popular notion in the media that white suburbanites are “white bread” people.

A few stand-up comics are trying to “reappropriate” this ethnic epithet: Jim Gaffigan, for example, is currently on his “White Bread Tour.” But it remains one of the few ethnic slurs that’s acceptable”indeed, almost unquestioned”in the 21st century.

Of course, blacks didn’t make up the “white bread” insult.

As an interesting Slate article by David Merritt Johns called “Why Do Jews Hate Mayonnaise?” recounts, the late Milton Berle used to joke, “Anytime somebody orders a corned beef sandwich on white bread with mayonnaise, somewhere in the world, a Jew dies.”

While some of those white foods are indeed dull, others are not. Vanilla, for instance, is a superb flavor. It lacks the oomph and caffeine kick of chocolate, but to a discerning palate, vanilla is more exquisite.

“A century ago, demanding whiteness was a way to fight corruption and adulteration in purchased food.”

At the other end of the subtlety spectrum, mayonnaise, while slightly disgusting, is delicious, offering a far richer flavor than its Germanic competitor mustard. If mayonnaise were a condiment from Kyrgyzstan only recently introduced to America, it would be a sensation among foodies.

Then again, the Borscht Belt jokesters did have a point: Average American whites in the middle of the 20th century sure did consume a lot of literally white stuff.

I finally started to understand when my wife mentioned that sometime before WWII her grandfather had worked inside a Chicago ice-cream factory. He came home and told his children, “After what I saw today, never eat any flavor of ice cream other than vanilla.”

The shift from homemade to store-bought food did much to liberate women from household drudgery, but it brought about new worries.

In 2014, “transparency” is a popular buzzword used in the fight against corruption. The Turkish GÃ¼len cult that runs all those charter schools in America, for example, is frequently upbraided for not being transparent in its finances.

Similarly, a century ago demanding whiteness was a way to fight corruption and adulteration in purchased food.

Today a fashionable diet item such as South American quinoa may look like ground-up bugs, but we trust that supermarkets couldn’t get away with selling us ground-up bugs. (They can’t, can they?) Back then, however, people didn’t put much faith in grocery stores and restaurants, especially when they were traveling”and often with good reason.

Now, though, even if we get food poisoning we have antibiotics to keep us alive. The introduction of penicillin around 1945 made American life less fraught”the chance of dropping dead from bad bacteria declined sharply.

The most thorough article on the white-bread wars is a long 2011 academic essay by Aaron Bobrow-Strain entitled White bread bio-politics: purity, health, and the triumph of industrial baking. It starts off with an abstract that touches all the postmodern lit theory bases:

Building on Michel Foucault’s work on bio-politics, it shows how notions of food safety dependent on discourses of purity, contagion, hygiene, and vitality inevitably constitute lines of exclusion and social hierarchy, even as they are used to mobilize “progressive’ social change.

But Bobrow-Strain’s article includes a key statistic. In 1890,