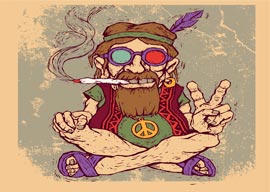 A couple of years ago on this site I wondered “Why Isn”t Racism Cool?“ Why, I asked, has the state ideology of the West not generated its antithesis, as historical trends are supposed to do? The Kultursmog of white ethnomasochism and xenophilia, of “diversity” and “hate,” of open borders and “no such thing as race,” is at least as stifling”and, in its underlying premises, at least as questionable”as the gray-flannel Organization Man conformism of the 1950s. So where, I asked, are our beatniks and hippies?

What’s wrong with kids today? Don”t they want to vex their parents? Ãpater la bourgeoisie? Kick against the pricks? Be transgressive?

The answer was coming into sight even as I wrote, at any rate in Europe. Its name was Identitarianism, and its first manifesto was already in print.

Two years further on, Identitarianism is still a fringe phenomenon in the U.S.A. I can personally testify that even sleepy English country towns had nests of beatniks in the 1950s. Contrariwise, you might turn up one or two self-styled Identitarians in 2015 Poughkeepsie, Podunk, or Pomona, but I doubt you”d find a full nest.

“There are encouraging signs, though, and here’s one of them: the first specimen known to me of Identitarian fiction.”

There are encouraging signs, though, and here’s one of them: the first specimen known to me of Identitarian fiction. The book under review here is Ryan Andrews” novel The Birth of Prudence. It is available in both print and Kindle format from VDARE.com’s publishing operation.  (As also, I can”t forbear mentioning, will be a new collection of my articles sometime soon.)

The action of the novel takes place from March to August of 1998 in Chicago. The four principals are coevals, aged about 21. Three of them are students at the university: roommates Ethan and Logan, and Logan’s friend Prudence. The fourth is Mark, who works in a stonemason’s yard. Prudence is American-born of Korean ancestry, while the other three are all white gentiles.

Mark meets Prudence in a bar and they fall for each other. A love affair commences, and the novel’s main storyline follows the trajectory of that affair.

The way the book is structured, though, only the first and last thirds of it are properly narrative. The middle third is a dorm room debate between Logan and Ethan that took place a year previous to Mark’s encounter with Prudence. The title of this middle section is “Universalism vs. Nationalism.” Logan takes the universalist position, Ethan the nationalist one.

So this is didactic fiction, a novel with a lesson. That debate in the middle third of the book provides an intellectual underpinning for the Identitarian drama played out between Mark and Prudence.

A lot of people don”t like didactic fiction, on the Sam Goldwyn principle: “If you want to send a message, use Western Union.” Fair enough: I won”t dispute matters of taste. I”m not one of those people, though. In fact, I think it’s hard to write a novel without making some kind of moral or philosophical point, if only inadvertently. Finnegan’s Wake might be a counterexample”I can”t say for sure, never having read it”but surely there aren”t many others.

Mark, the protagonist of the novel’s narrative part, is thoughtful and bookish, or at any rate not un-bookish, in spite of having no college education. He is subject to “periodic fits of intellectual agitation”; but until Prudence enters his life he has no idea how to organize those fits in any one direction.

Prudence is Korean by blood, but not otherwise. Her tastes are all Western: concert music (she plays the piano), Shakespeare, ancient Greece. She is something of an improver, and draws Mark into her interests. They read Euripides together “with fury and passion” and visit art galleries. All this has the unintended effect of awakening Mark to his racial identity.

The awakening process gets a boost from another quarter, too. Mark’s boss at the stonemasonry yard, a Lithuanian, has a daughter whom he brings in to do secretarial duties in her summer vacation. This daughter, Kristina, is an idealized North-European female, a long-boned blonde beauty. Mark is smitten by her, though not sufficiently to detach his affections from Prudence.