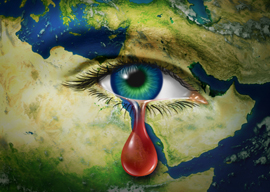 Every schoolchild is taught that the evil Germans invaded Poland in 1939 because they loved killing people (usually infants). This crippled account of history with hatred as its crutch continues throughout high school and university only to be mended, to the extent it ever is, in graduate school or by self-education. Then the inquisitive mind learns that the war was perhaps not entirely caused by Germans’ insatiable need for babies’ blood.

Lamentably an area known as the Danzig Corridor was to drag Britain and France into a continent-wide conflict that resulted not in the legitimate surrender of a Polish strip of historically German land, but instead the sacrifice of Poland to decades of Soviet tyranny. Some heroic individuals foresaw this and attempted to avert it.

In the end, Britain and France blundered into a charnel house that need never have existed, and it was largely in the service of promises, assurances, and treaties with Warsaw. After all, they reasoned, had not Germany crossed a red line?

Thankfully history never repeats itself and the United States is blithely in the process of threatening the Syrian government over a set of red lines that the US drew.

“That is the thing about red lines; they are almost always written in blood.”

The US has already enacted economic boycotts and maneuvered to have Syrian authorities blackballed by United Nations members and various other gentlemen’s clubs in order to marginalize Bashar al-Assad’s leadership. The Americans have even supported the very people who supported the Saudis responsible for 9/11 in order to achieve their aims. All this has occurred in the unreality of the diplomatic arena.

Meanwhile any discussion of the physical reality in Syria is fraught with peril. For unlike the Mexicans invading America, the Americans invading Syria actually are “in the shadows” (though American money, American weapons, and American mercenaries do not technically qualify as American military involvement).

How could any American countenance a nation launching a war against its own people (not counting Sherman’s raping/looting/murdering spree to the sea)? Who in America would bear an administration using biological weapons against its citizens (excepting Tuskegee and LSD)? What American would tolerate representatives oppressing a racial sect (omitting Native Americans until 1911/African Americans until 1954/white Americans since at least 1969)? If any government is uniquely suited to condemning any other, it is obviously that of the United States.

No one, whether in Washington or not, has any definitive account of what is happening. The use of chemical weapons was supposedly a red line not to be crossed, yet there is some evidence the line was crossed by al-Qaeda (er, Syrian “rebels”). We cannot be certain what this means, but it apparently does not mean the US will enter the fray on al-Assad’s side. That would be both logical and rational, traits that politicians tend to eschew.