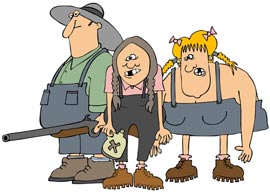 Former Virginia senator Jim Webb is campaigning for president to bring low-income whites back to the Democratic Party, recently telling Yahoo News that “I think that [the Democrats] have kind of unwittingly used this group, white working males, as a whipping post for a lot of their policies.” So how’s that rhetoric resonating? He’s lucky to make it above 1% in many polling areas. Clearly, the party of identity and inclusiveness has no room for whites holding two jobs to keep a household afloat.

Meanwhile, Republicans, being the whipping boy of cultural elites, are too cowardly to acknowledge the struggle of unemployed people who lack a tan melanin composition. Can you imagine the media’s shrieking outrage over a group called White Americans for Jeb Bush? (Keep in mind, there wasn”t a peep for African Americans for Obama or Latinos for Obama in 2012.)

It’s all a damn shame, because white-trash lives matter. They deserve the same kind of attention as others who hover a pay period away from destitution. As globalization increasingly pushes manufacturing and low-skilled jobs overseas, now is the time to reach out to those in rural areas who have lost sight of the key ingredients to a good life: a sense of purpose and freedom within limits. And paradoxically, this is being shown in the aftermath of the Dylann Roof murders in Charleston, S.C.

“With victim narratives all the rage, why did it take a brutal shooting to bring attention to the squalid and meager living conditions of poor white Americans?”

Roof, if you remember, shot and killed nine members of a Methodist Episcopal church who were attending a prayer meeting. He was inspired by racial hatred for blacks. Currently, he is awaiting sentencing for his heinous crimes.

That’s where the popular version of events ends. Washington Post reporter Stephanie McCrummen wasn”t content to let Roof’s massacre go unquestioned, however. She sought out the roots of his destructive, hateful worldview. What she found is no surprise to those who grew up among pot-smoking, video-game-playing youth in Middle America.

In her report titled “An American Void,” McCrummen stumbles onto one of the country’s best-kept secrets: the seedy underbelly of poor white Americans. Prior to killing the nine congregants in Charleston, Dylann Roof lived with a few friends in a grimy, ramshackle trailer on the edge of Columbia, S.C. These friends, all between the ages of 15 and 21, live a meaningless existence. They spend their days sleeping, getting high, playing video games, and waiting for an uncertain future. Most have dropped out of school. Only one works. The owner of the trailer, 41-year-old Kim Konzny, is twice divorced and pays the bills as a server at a local Waffle House. Her listless children were pals of Roof, whom they let sleep on the living-room floor.

With victim narratives all the rage, why did it take a brutal shooting to bring attention to the squalid and meager living conditions of poor white Americans? After all, the poverty and hopelessness of America’s inner cities still gets plenty of limelight. There’s something else going on.

The racial privilege status of white trash makes them unattractive to the media because being penurious and pale-skinned is not respectable. While poor minorities are viewed with dignity and sympathy (as they should be), the same doesn”t apply to Caucasians. The white working class is, as Baptist minister Will Campbell put it, “the last, the only minority left that is fair game for ethnic slurs from people who would consider themselves good liberals.” Since the Progressive Era, the U.S. government has made it a goal to forcefully equalize society between races, classes, income scales, and gender. But to Campbell, “poor whites have seen government try to make peace between various warring factions but they have not been brought to the bargaining table.”

The result is pockets of despair in many parts of the country, most predominantly the South. And while it’s true that poor whites have always existed in America, the callous disregard for their difficulty we see by blue bloods in the Acela corridor is new. People like Kim Konzny have been stripped of dignity and left to fend for themselves without the assistance of the media or Washington elites. Unlike impoverished blacks who hold tight to faith and community, they are without an honorable sense of identity. If they cling to the Bible, they are seen as brainless, flat-earth bumpkins. If they somehow succeed in getting out of the trailer, they are demonized and told they”ve earned nothing because of “white privilege.” If they try to stick with their own kind, they are called neo-segregationists.