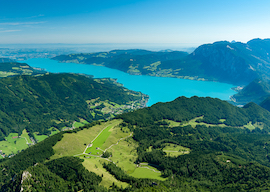 A trip through Europe has convinced me that freedom is overrated.

Sure, Americans won a revolution and fought two world wars for our precious freedom. We are free to own guns, free to speak our minds no matter how simple, free to worship anyway we want.

But Europeans regulate everything and it seems to work.

In Europe, one needs a license to operate a sailboat. I’ve sailed all over the North Atlantic, and even competed once in the Fastnet, but I couldn’t rent a little day sailer on a little lake in Austria because I don’t have a license.

Austrians also need a license to go fishing, before they can apply for a fishing permit. And if they want to go hunting, they need to take expensive courses in gun safety and animal behavior. And they need to hire a Jaegermeister (“hunting master”) to guide them.

Austrian boys join the military instead of doing a year of social work just so they can later get a hunting license. The conscientious objectors don’t qualify.

When I told my Austrian friends that no licenses were required to go sailing or fishing in America, they were shocked. Austrians even need a license to play golf.

Yes, we have a lot of incompetent bozos crashing their motorboats, amateur anglers catching nothing, and drunken hunters shooting each other in the woods. But they are exercising their constitutionally guaranteed right to the pursuit of happiness.

“In France, there are such lucrative incentives to have four children, it is said the fourth child pays for the other three.”

In Europe, hunting has always been done by the aristocracy, and it doesn’t occur to commoners that they have a right to hunt, or fish, or sail.

The overregulation works in other ways as well. Landowners don’t have the right to erect ugly buildings on their land. It’s as if the entire continent has been landmarked.

You’ll see a cornfield on the shore of a lake and wonder why some developer hasn’t built a hotel there. Because the government won’t allow it. You also don’t see rusted-out cars in their yards, and rotting couches on their porches. It’s all picture-postcard perfect, with window boxes blooming.

On the lakes in Austria, there are no Jet Skis, and very few motorboats. Quiet electric boats are the norm.

There are robot lawn mowers quietly trimming the grass on manicured lawns. Why don’t we have these in the States? Probably because they’d be stolen immediately by the same crooks who steal bikes.

Europe is surprisingly clean and litter-free. The capitals have efficient mass transit. There are even water fountains on the streets of Vienna for thirsting tourists.

A German told me the national health care is fine, although his family was covered by supplemental insurance. “Instead of waiting 10 days for an appointment, we only wait three days.”

There is no separation of church and state. The German government collects a church tax of up to 9 percent whether you are Catholic, Protestant, or Jewish. Weirdly, Muslims are exempt.

But—there’s always a but—the over-intrusive government is undoubtedly stifling the economy. It is nearly impossible to fire employees in Europe, or lay them off in a downturn. As a result, CEOs are afraid to hire.

In Germany, pregnant women can take a leave of absence for three years with the guaranty that their job is waiting for them. Then they can get pregnant again and disappear for another three years, and so on.

“I won’t hire a woman in her late 20s,” one businessman told me.

In France, there are such lucrative incentives to have four children, it is said the fourth child pays for the other three.

The benefits are so good that the million-plus migrants Angela Merkel welcomed from Syria and other shithole parts aren’t eager to find jobs. And the migrants who do get jobs don’t keep them.

Mercedes tried hiring migrants for its assembly lines, but they couldn’t handle the 9-to-5 grind, and they quit. In France, 18,000 factory jobs are unfilled.

The Muslims won’t assimilate anytime soon. I’d say it will end badly, but it won’t end at all.

It’s as if Merkel and her minions looked at America with its dark history of slavery, segregation, and intractable racial strife, and decided, Europe needs some of that too.

They also need ice cubes and window screens. If I can come up with a design for a screen that will fit those swinging windows, I’ll be a billionaire.