Who Needs the Oscars? 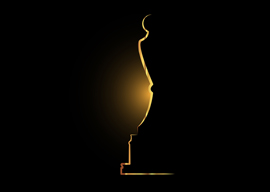 LEXINGTON, Ky.—Two hundred years from now an anthropologist will go through the digital archives of the Academy of Motion Picture Arts and Sciences and he’ll write a paper (although there will be no “paper,” so he’ll call it something else), and his paper will be about how a defunct civilization once had arcane rituals by which they sorted films into categories and handed out statues to people who were deemed worthy within their category. He will describe a kind of mass psychosis during which people constantly used the word “deserve,” as in “He didn’t deserve that Oscar,” “He was overdue—he deserved that recognition,” and “Never has an actor been more deserving than…”

Than Al Pacino for Scent of a Woman? Really?

Listen, people: Nobody “deserves” or doesn’t deserve an Oscar. It isn’t something you work toward through rigorous peer review, like going after your Ph.D. in physics. It’s a 13-inch tin totem with a gold-plate veneer on it that rubs off if you handle it too much. You get one by winning a secret vote—like in a fraternity—and the only people who can vote are those who got the same award in the past and became members of an organization that was created in the 1920s to bust the Hollywood unions. It’s an organization of producers, not artists, and their goal is to maximize year-to-year revenue, like the board of directors of similar trade organizations representing coal-mining companies, sheep farmers, and condom makers.

We would all be healthier if we acknowledged these facts and stopped going into emotional hysterics every time “The Academy”—one of the snobbiest arts organizations ever created, and I’m including the Académie Française on that list—every time The Academy issues a public statement. They made a big deal out of kicking Harvey Weinstein out of their club, but it would have made more sense to take away his Best Picture Oscar for Shakespeare in Love.

“We’re stripping Shakespeare in Love of every Oscar and every Oscar nomination and banning it from all Los Angeles retrospective art houses for all eternity, because it was crap. We knew it was crap at the time, but we thought it was good for business. Harvey Weinstein is no longer good for business, and neither is Shakespeare in Love, so we would recommend destroying your DVDs as we return this sacred Academy to its core values—giving as many awards as possible to the highest-grossing films.”

Now, that would have been a press conference worth attending.

The high priests at The Academy have been in a tizzy all summer because (a) nobody watched the Oscar ceremony this year, and (b) none of the top ten box-office movies of the year got any awards to speak of. Instead, everyone had to stand around at the Vanity Fair after-party gushing about The Shape of Water—a goddamn monster movie!—and Get Out—a goddamn horror movie!—and indie crapola like Lady Bird.

“Listen, people: Nobody ‘deserves’ or doesn’t deserve an Oscar.”

Who didn’t get the memo? Who even watches this stuff? Where do you go to see these movies? Berkeley? Key West? Greenwich Village? Siberia?

They long for the good old days when all they had to do was send a few luxury buses out to Palm Springs, hook all the Academy members up to their IVs, and wheel ’em down Wilshire Boulevard to cast their ballots. Then they could return to the office assured that the truly great movies would win every year.

And Going My Way, one of those Bing Crosby movies where he wears a clerical collar, in 1945.

And, oh yeah, Driving Miss Daisy in 1990 and Forrest Gump in 1994, movies with so many comforting stereotypes about the South that they started offering barf bags at suburban malls in Hattiesburg.

And, almost forgot, Out of Africa, the movie that makes you happy to see Meryl Streep contract syphilis and Robert Redford dead in a plane crash, and Gandhi, the three-hour, 11-minute epic that everyone loves to rewatch on football weekends.

And so, longing for those days when artistic genius was properly honored, The Academy announced a few days ago that they would be creating a new category for the 2019 Oscars—“Popular Film.”

As opposed to the decidedly unpopular films they would normally be voting for? They didn’t say.

As all hell broke loose—should Black Panther be campaigning for Best Picture or Best Popular Film?—Academy executives started trying to explain what they meant, and it came down to what it usually comes down to: The moguls were complaining.

This is not what they said. What they said is that they were stunned and perplexed by a state of affairs in which the top ten highest-grossing movies of the year are hardly mentioned at all at awards time, and they wanted the wonderful people who work on those films to receive the recognition they deserve.

So let me take a stab at a possible explanation for this state of affairs.

Seven of the top ten films were sequels:

Justice League (a sequel to Batman v. Superman: Dawn of Justice)
Pirates of the Caribbean: Dead Men Tell No Tales (714th in the series)
Thor: Ragnarok
Guardians of the Galaxy Vol. 2
Spider-Man: Homecoming
Despicable Me 3
The Fate of the Furious (yes, Vin Diesel recovered from every life-threatening injury suffered in the last one)

Now. I’m not saying that you can’t vote for a sequel. Evil Dead 2: Dead by Dawn was better than Evil Dead. The second Godfather movie was the best of the three.

But I am saying that even the most hardcore cynical union member who managed the optical-effects work on Thor: Ragnarok and expects to send three of his kids to Ivy League schools with future income from the same franchise probably hesitates to check that “Best Picture” nomination box. Somewhere deep in the medulla oblongata of his being, there resides some faint memory of a film professor who lectured on the mise-en-scène of Citizen Kane (even though—and here I’m contradicting myself—Citizen Kane lost out for Best Picture to the aforementioned How Green Was My Valley, which admittedly was the greatest film ever made about conflicted Welsh coal miners).

But if people hesitate to vote for sequels—and they do—then there are still three other films to choose from.

Two of those films are remakes:

It
Beauty and the Beast

Voting for It would require three levels of apostasy: (a) voting for a horror movie, (b) voting for a foreign director who doesn’t hang around El Lay, and (c) voting for not just a remake, but a remake of a TV movie.

Voting for Beauty and the Beast would require comparing it favorably to Jean Cocteau’s 1947 version—one of 17 versions of the same story. It’s hard to vote for the 17th version of anything.

And that leaves one movie from the top-grossing films of the year: Wonder Woman.

If they’re so concerned about big studios being left out of the awards, why not just give everything to Wonder Woman? Best Picture, Best Actress, Best Musical Score, Best Effects, and—beloved of Hollywood—best #MeToo statement embedded in a fantasy script. It even had a female director!

So how many nominations did Wonder Woman get?

Uh, that would be zero.

Nobody got that memo, either.

So anyway, the “Popular Film” category was created in an effort to make sure this never happens again. But after a few days of everyone pointing out how silly the category was, and how difficult it would be to decide who goes into the “Popular” ghetto and who gets to compete in the “Real Film” competition, they quietly withdrew the change and said they would reconsider it for 2020.

Meanwhile, there’s a far simpler solution to this.

Get rid of the idea of “Film.”

Wow, what a concept. But could any of The Academy’s overlords win in such a world?

Better go in the other direction.

Rename it the Academy of Comic Book and Theme Park Adaptations Recycled in Various Formats Arts and Sciences.

Now you guys got a lock. Order is restored. Cue the dancing girls. Find somebody who knew Irving Thalberg and give him an honorary award. We all get to put on tuxes and valet-park our Mercedes G-Class rides at the Dolby Theatre and listen to Jimmy Kimmel tell safe jokes until it’s time to go back to Bel Air and pop a Zoloft before bedtime. Hollywood is intact.