Who is Marco Rubio? “¨The Man Who Would Be Vice President 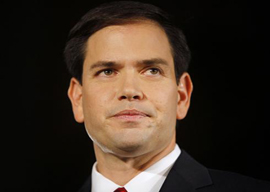 With electoral successes in Arizona and Michigan, Mitt Romney’s accession to the Republican nomination is all but concluded. Barring an unforeseen misstep the nomination is Romney’s to lose, as it has always been.

But who is Marco Rubio? The party dignitaries seem to have already anointed him, making it important to take a good hard look at what is being foisted upon us.

To begin with, he’s a man with a compelling backstory. Rubio’s father came to America from a communistic Third World nation where he was of minor importance. At least that was the original backstory. This man-who-would-be-deputy-king has had a little trouble getting his facts straight in regard to whether his family came to America to escape communism or only wanted to take a slice of the American pie for themselves.

Rubio eventually went on to study law at a prestigious university. Nothing he did at that time was of particular consequence, yet he managed to achieve high honors and graduate with dignity. There is no public record of his entrance-exam scores, so there is no way to know whether his bar was set at the same level as his classmates. Nevertheless, he became an attorney.

“He has done little of magnitude since taking office except to be touted for another higher office.”

Upon entering society at large, our seemingly preordained vice-presidential candidate attended more than one denomination and drifted back and forth between several over the years. Some have accused him of pandering to the beliefs of whatever community he happened to find himself in at the time, while his defenders say this is merely evidence of sincere soul-searching.

Rubio commenced his political career at the state and local levels. His noteworthy product during this time was a community activism of sorts whereby he collected others” ideas and presented them in a book over which he claimed authorship.

Next Rubio ran for the national Senate. It was an especially active year for niche interest groups and he faced a hampered opponent. It all worked to the candidate’s benefit and his seat was secured. He has done little of magnitude since taking office except to be touted for another higher office.

With his choice of chief of staff and his membership in an explicitly racial clique, it’s clear to whom Rubio answers first, with the majority of his constituents coming in a distant second. Endorsing thinly veiled schemes of minority advancement raises questions about his genuine intentions once power is within his grasp.

In sum, this is a man who has a dubious personal history. He was given exceptional educational opportunities by questionable means. He spent his formative political years engaged in community activism while attending a variety of churches apparently as they suited his political rather than spiritual needs. As someone who has spent less than one term as a Senator without defining qualifications or legislative achievements, his sole merit as choice for national prominence is that he happens to be of a minority race.