Who Killed The New York Times? 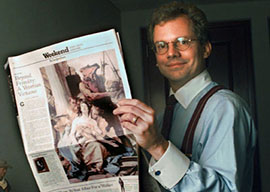 When William McGowan finished his award-winning book Coloring the News: How Political Correctness Has Corrupted American Journalism, the New York Times Book Review refused to review it. When pushed for a reason, then-editor Charles “Chip” McGrath asked, “Is this newspaper…the best place to discuss a book that is so critical of this newspaper?”

That was in 2001. Last week, Encounter Books released McGowan’s follow-up, Gray Lady Down: What the Decline and Fall of The New York Times Means for America, and the same thing is happening. When pushed for a reason why the Times hasn”t reviewed it, new editor Sam Tanenhaus said, “[The publisher] has had a stated policy for some years now of not sending us books because, as I understand it, [Encounter publisher] Roger Kimball does not want them reviewed in the Book Review.”

Tanenhaus is referring to the fact that his copy of the book came from McGowan himself and not the publisher. This is because after the Times ignored mountains of their best-selling, critically acclaimed books (many critical of Obama), Encounter gave up sending review copies to them.

Gavin McInnes: Didn”t Tanenhaus personally guarantee you he was going to review the book?

Bill McGowan: Yes, he did at an LA Times Book Review event several years ago. He’s using this spat with my publisher as a fig leaf to cover his ass so he can ignore the book and save himself troubles with the boss.

I obviously want a review and so does the publisher, but what can you do? You can”t get blood from a stone.

Why did they hate Coloring the News so much?

That book discussed how papers like the Times make diversity a personnel policy and the next thing you know, you”re a political cheerleader doing bias reporting on immigration, Islam in America, the candidacy and presidency of Barack Obama, gay rights, transgressive popular culture, the War on Terror, and our military operations in Iraq and Afghanistan.

“The Times“ dogmatic obsession with diversity leads to a cultural relativism which has seriously hurt their credibility.”

Aren”t the Times staffers just a bunch of bourgeois Ivy Leaguers completely out of touch with the real world?

That might have been the case in the past, but not so much anymore, although it is true most people working at the Times have the predictable liberal biases absorbed from the orthodoxy of political correctness that prevails at universities and liberal social circles.

My favorite part of Coloring the News was the reporter who decided to check if third-trimester abortions really were as rare as everyone said. She hit the phones and contacted dozens of clinics in New Jersey and discovered the whole thing was a lie. Third-trimester abortions are, in fact, very common. Later, when the doctors were asked why they misled the public, they claimed they figured it was for the “greater good.”

The point I make again and again in this book is: Neglecting to report certain news items can be just as damaging as misreporting news.

Which is why this refusal to review the book is such a profound metaphor. They seem to think the ends justify the means, so they”ll start with a final concept and then go backwards filling in details that fit. If anything gets in the way, it’s cut out of the equation. They believe what they want to believe.

What are some of their biggest PC blunders outside of Jayson Blair, Plamegate, and ignoring the innocence of the Duke lacrosse players?

There was the wealthy prep-school girl who convinced them she was a poor orphan who had been adopted by this Big Mama character and ended up making crack and hanging out with the Bloods and the Crips. All a lie.

The female naval officer who said she was raped in Iraq and this was the second time it happened in her naval career. The Navy later confirmed she”d never been to Iraq.