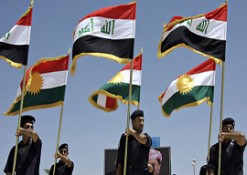 This is no time to be a journalist, especially if you happen to be a Kurd. Under assault from Turkey and Iran, Kurdish journalists are imprisoned, tortured and intimidated. An Iranian revolutionary court sentenced one Kurdish journalist, Adnan Hassanpour, to death last year for alleged espionage. The death penalty was also passed on his cousin, Abdolwahed Batimer, head of the environmentalist Green Mountain group. Their crime appears to have been granting an interview to the Voice of America, and evidence against them at the trial included such seditious objects as a Kurdish flag, videocassettes in the Kurdish language and photographs of them with their families in neighboring Iraqi Kurdistan. The cousins appealed their sentence twice, which finally resulted in a reduction of sentence to thirty-one years. By Iranian standards of injustice, which include the death penalty for minors and execution by stoning for convicted adulterers, the cousins fared better than most. However, journalists in the Kurdish regions of Iran are under warning to avoid certain subjects and withhold information reinforcing the case for Kurdish autonomy.

Turkey’s record on Kurds and Kurdish journalists is, if anything, worse than Iran’s. Apart from the old war against the Kurdish Workers Party (PKK) that ended nearly twenty years ago with about 30,000 Kurds dead, the government has kept a close watch on its large Kurdish minority. While legal reforms led at last to toleration of the Kurdish language and a Kurdish television channel in 2009, only one Kurdish newspaper was permitted to publish. Its experiences have no doubt discouraged other contenders. (From the time of Moustafa Kemal Ataturk, the leader who saved Turkey from becoming a western colony after the First World War, Kurds were officially labeled “mountain Turks,” and their language was prohibited until the 1990s.) The first Kurdish paper allowed under the moderate liberalization of the language laws, Azadia Welat, has come in for exceptional government scrutiny and regular bannings. It has lost six editors in four years. They have either been imprisoned or placed in such fear of their lives that they left the country. One editor, Ozan Kilinc, received twenty-one years in prison for mentioning the imprisoned former leader of the PKK, Abdallah Ocalan, and for not using the word “martyr” to describe Turkish soldiers who died in Kurdistan. The latest editor to come under official sanction, Vedat Kursan, allegedly disseminated “terrorist propaganda” for which he received a total of 166 years behind bars. He”ll be 202 then, and Turkey will probably still be on the waiting list for European Union membership.

Denying freedom of expression to Kurds under the rule of Turks and Persians is criminal, but the repression of Kurdish journalists by the Kurds” own government in northern Iraq is tragic. The Kurdistan Regional Government and the two political parties that control it, the Kurdistan Democratic Party (KDP) and the Patriotic Union of Kurdistan (PUK), have governed northern Iraq as a semi-independent state since 1991. The autonomous region came into being when the first Bush administration, having betrayed the Kurds by calling on them to rebel against Saddam Hussein and then allowing Saddam to use his air force against them, was forced to declare an air umbrella over northern Iraq. Under this vague protection, which allowed more than a million refugees who had fled to Iran and Turkey from Saddam’s helicopter gunships, to return home. Since then, the two Kurdish parties fought a civil war that eventually divided the northern zone into two satrapies”the KDP’s in the northwest, the PUK’s in the southeast. Surprisingly, however, they achieved miracles.

“If this had been the only murder of a journalist in northern Iraq, and if there had been no instances of intimidation of the press before that time, it would possible to dismiss Osman’s killing as revenge by some madman whose love of Barzani outweighed his commitment in free expression. Alas.”

Inheriting a mountainous land where the Iraqi army had destroyed about two thirds of all villages and killed tens of thousands of Kurdish men, women and children, the newly autonomous Kurds set about building a country. As a frequent visitor there, I saw civil society groups form to protect women’s rights, to improve child healthcare, to remove millions of landmines and to establish a judiciary whose decisions were not arbitrary reflections of a dictator’s fiat, as in the rest of Iraq. Businesses formed, some Kurdish exiles came home, schools were built and trees were planted. To those of us who had followed the Kurds” fortunes and admired their independent spirit, their achievements “ even amid their leaders” in-fighting “ were admirable.

The Kurds supported the American invasion of Iraq in 2003, not because of Saddam’s weapons of mass destruction (although they had been victims in 1988 of one of those weapons, poison gas), but because they believed it would lead to greater freedom for themselves and a new relationship (possibly leading to full independence) with Baghdad. The PUK head, Jalal Talabani, became president of Iraq, while the KDP chief, Massoud Barzani, took the more powerful job of President of the Kurdish Regional Government. The Kurds were the only ones who actually fought for the Americans and are still America’s only reliable allies in the country. After 2003, the three Kurdish provinces flourished thanks to humanitarian aid, illegal sales of Iraqi oil and trade with Turkey and Iran. But many said the wealth was reserved to the small coteries around the two ruling parties, which led to the formation of an opposition party, Goran (Change), that took about half the popular vote in July’s elections.

One of the brightest buds to emerge on the flower of democracy in Kurdish Iraq was the newly free press “ newspapers, magazines, television channels, radio stations and websites. The Kurdish parliament enacted a press law in September 2008 that included the provision: “Press is free in Kurdistan, and it should not be subject to any prior supervision.” Many of the youngsters finding their way in the brave new world of Kurdish journalism learned their skills as fixers, researchers and translators for the western news organizations who flooded into the country at the beginning of 2003 and needed help. (I am proud to say that many of those who worked for our ABC News offices in Suleimania and Erbil, the region’s two largest cities, have gone on to become brave, independent journalists reporting to their own people.) They were good at their craft, and they did what journalists should do (but do all too little these days): they annoyed the powerful.

A future Jonathan Swift emerged in the form of a twenty-two year old English literature major at Salahuddin Univeristy, Sardasht Osman. A good writer for Kurdish and English-language websites, Osman made many tongue-in-cheek modest proposals to annoy the authorities. One Art Buchwald-type column earned him particular attention last May. As a young man from a poor family, he knew there was only one way to fortune and power in the new Kurdistan: marry into a ruling family. “I am in love with the daughter of Massoud Barzani, the man who appears here and there and claims he is my president,” he wrote. After stating that he would put his own family in the positions of power now held by Massoud Barzani’s relations, he wrote, “All my friends said, Saro, let it go and give it up for otherwise you will get yourself killed.” In early May this year, as he walked towards campus for class, Sardasht was grabbed by armed men and driven away in a white Hyundai van. A few days later, police found his body outside Mosul. He was in handcuffs and showed signs of torture. There were also several bullets in his head.

If this had been the only murder of a journalist in northern Iraq, and if there had been no instances of intimidation of the press before that time, it would possible to dismiss Osman’s killing as revenge by some madman whose love of Barzani outweighed his commitment in free expression. Alas, Osman’s killing was one of many instances in which newly autonomous Kurdistan resembled other suddenly free nations of modern times. In former Soviet Central Asia and in Africa, leaders retained the affection of the West while treating their treasuries like private savings accounts and eliminating journalists (as well as teachers, human rights workers and trade unionists) who pointed out their depredations. Thus, about twenty western journalists, known publicly as friends of the Kurds (dating back to the days when the US and British governments snubbed Kurdish leaders and concealed Saddam’s crimes against the Kurdish people). About twenty of us wrote an open letter to Massoud Barzani and Jalal Talabani to request an independent investigation into Osman’s murder, without accusing them of the crime. The letter mentioned a worrying trend involving the killing of another journalist, Soran Mama Hama, police attacks on journalists at demonstrations and intimidation of reporters for what they had written.

Our determination to see the culprits brought to justice does not mean that we are prepared to jump to conclusions and prejudge the results of the investigation before all relevant facts and information have come to light, which unfortunately you appear to have done.  We did not expect this from friends and it is impossible for us to take this statement in friendship.

The KRG agreed to an investigation, although it was not the independent (judicial, parliamentary or international) inquiry we requested. However, more than three months after Osman’s death, the investigation has not issued any findings. The time has come for the Kurdish government to answer the question: who killed Sardasht Osman?