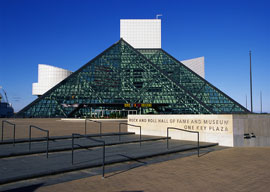 If the Jews really ran show business, then KISS would”ve been inducted into the Rock and Roll Hall of Fame the first year they were eligible”in 1999, 25 years after the release of their first record.

Pure snobbery has kept them out. It’s a snobbery I once shared. Then I got hooked on the reality show Gene Simmons Family Jewels. In contrast to tremulous Ozzy Osbourne and his rude, rudderless spawn, Simmons’s offspring seemed smart, sane, and sober. His wife, a still-beautiful blonde, was no dummy herself. The workaholic pater familias himself (born Chaim Witz in Haifa, Israel) is Yiddisher kop incarnate, a marketing genius before either “branding” or “fandom” were words.

I happily watched Simmons making deals on the phone for season after season for the same reason I enjoy intricate heist films and footage of top-tier pit crews: the satisfaction of watching a smooth, successful professional in action.

“White artists reflexively laud the black roots of rock, but as far as many blacks are concerned, the genre’s just hillbilly country & western with a different, often English, accent.”

For all those reasons and then some, it was KISS’s time.

Sure enough, when public voting ended last week, KISS topped the list. Assuming the Hall’s voting members take that tally into consideration, then the half-Heeb hard-rock group will make up (no pun intended) Cleveland’s “class of 2014” along with Nirvana, Deep Purple, Yes, and Daryl Hall and John Oates.

Notice anything? In racially obsessed America, how can one not?

I’ve just discovered that “the Rock and Roll Hall of Fame is racist!” has been a meme for a while.

The first “classes” of inductees, starting in 1986, were justifiably larded with legendary African-American rock pioneers such as Chuck Berry, Fats Domino, Ray Charles, and Little Richard.

“However,” says this guy, “beginning in 2003, things began to change….For the first time ever, not one black act was elected. People were left to mutter, ‘Well, at least the Righteous Brothers sound black.’”

So did fellow inductees The Police and The Clash, if “reggae music for white people” counts. Elvis Costello did call Ray Charles a “blind, ignorant nigger” a really long time ago during a barroom wind-up, though. Maybe that’s the “racist” part?

A glance at subsequent Rock and Roll Hall of Fame inductees does seem to show a whole lotta “white privilege” goin’ on. This is considered especially troubling since it’s accepted as gospel that rock and roll was invented by blacks, then stolen by white people.

But were those black “inventors” as disgruntled as we’re led to believe? Sure, Pat Boone covered Little Richard’s originals, supposedly to make them more palatable to white listeners, and we’re  supposed to be righteously indignant about that. Except that: a) Little Richard still got the songwriting royalties; b) Boone and his ilk stoked curiosity about the original black artists, some of whom did pretty well in the long run; and c) Little Richard stole his whole act from another black guy anyhow.