Who’s Afraid of the Fiscal Cliff? 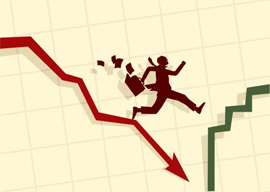 Were the average Republican asked for a succinct statement of his views on taxation, he or she might respond thus:

“U.S. tax rates are too high for the world we must compete in. The tax burden—federal, state, local, together—is too heavy. We need to cut tax rates to free up our private and productive sector and pull this economy out of the ditch.”

This core conviction holds the party together.

Yet today the leadership is about to abandon this conviction to sign on to higher tax rates or revenues, while the economy is nearing stall speed. Yet, two years ago, President Obama himself extended the Bush tax cuts because, he said, you do not raise taxes in a recovering economy.

Why are Republicans negotiating this capitulation?

Because they have been warned that if they do not sign on to a tax hike, they will take us all over a fiscal cliff.

If we go over, Republicans are being told, you will be responsible for tax hikes on all Americans as the Bush tax cuts expire on Jan. 1.

You will be responsible for a surge in tax rates on dividends, interest, capital gains, estates.

You will be responsible for an automatic sequester catastrophic to the national defense.

This is the pistol Obama is pointing at the GOP. This is extortion.

Republicans are being told that they either vote for something they believe to be wrong and ruinous—or get something worse. Pay the ransom, fellas, Obama is demanding, or take the blame for a second recession.

Like the Panama Canal debate that made Ronald Reagan a hero, this is a defining moment. No GOP senator who agreed to the Carter-Torrijos treaty ever made it onto a national ticket.

What are the perils for Republicans who sign on to an Obama deal?

They will sever themselves permanently from much of the base of the party. While their votes may ensure that tax rates or revenues rise, they will have no assurance that the promised spending cuts will ever be made. Even Reagan fell victim to this bait-and-switch.

Then, if the tax hikes slow the economy, Republican collaborators will share the blame. Not only will they have gone back on their word, they will have damaged the recovery. What would be their argument for re-election?

If you believe higher tax rates or tax revenues would be like poisoning an already weak economy, why would you collaborate in administering that poison? Why not just say no?