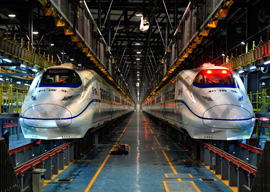 At Philadelphia’s 30th Street Station on Tuesday, lifelong government rail promoter Vice President Joe Biden unveiled a $53 billion high-speed train initiative and half-joked: “I’m like the ombudsman for Amtrak.” As with most gaffetastic Biden-isms, the remark should prompt more heartburn than hilarity. Just who exactly is looking out for taxpayers when it comes to federal rail spending?

Vigorous independent oversight of public infrastructure binges is especially critical given the nation’s long history of mass transit slush funds, cost overruns and union-monopolized construction projects to nowhere. Among the new projects championed by the Obama administration: a $10 billion New Jersey-to-New York commuter rail tunnel pushed by Senate Democrats that state officials won’t pay for but believe everyone else in the nation should be forced to subsidize. When Biden talks about “seizing the future,” he’s talking about seizing your wallets for his party’s electoral security.

Alas, the White House hostility toward vigilant taxpayer watchdogs rivals Michael Vick’s. And the Obama administration’s political abuse of the Amtrak inspector general’s office, still under congressional investigation, is a recipe for yet more porkulus-style waste.

In June 2009, longtime veteran Amtrak inspector general Fred Weiderhold was abruptly “retired”—just as the government-subsidized rail service faced mounting complaints about its meddling in financial audits and probes. He had blown the whistle on overzealous intrusion by the agency’s Law Department into his investigations of $1.3 billion in rail stimulus money and exposed how Amtrak’s legal counsel had usurped the watchdog’s $5 million portion of federal stimulus dollars to hamstring his probes. Even more threatening to the Democratic attorneys’ cabal, Weiderhold discovered that the federal rail bureaucracy was retaining outside law firms beyond the independent watchdog’s reach and obstructing subpoenas issued to an outside financial adviser.

In September 2010, GOP Sen. Chuck Grassley and Rep. Darrell Issa released a report concluding that the Amtrak board removed the agency inspector general without required prior notice to Congress and despite the inspector general’s effective track record of “exposing waste, fraud and abuse at the highest levels within Amtrak.”

“Among the new projects championed by the Obama administration: a $10 billion New Jersey-to-New York commuter rail tunnel pushed by Senate Democrats that state officials won’t pay for but believe everyone else in the nation should be forced to subsidize.”

The Transportation Department’s inspector general is now conducting its own independent probe of Weiderhold’s removal. And two weeks ago, Issa revealed that the new Amtrak IG, Ted Alves, is risking his own neck by probing into whether Amtrak bureaucrats on a fishing expedition misused the e-mail system by searching for communiques between his office and Congress regarding the Weiderhold scandal.

Grassley is right: “Independence is the most important element for making the inspector general system work. If independence is compromised, either by an inspector general or by agency leaders, then taxpayers are left without a watchdog and a major opportunity for accountability in government is lost. When the system gets compromised, there need to be consequences in order to try to prevent it from happening again.”

Amtrak’s notorious book-cooking, however, has gone unabated. The agency was reprimanded during the Bush administration for misleading Congress about its solvency. But former employees faced no criminal charges for fudging the agency’s profit-and-loss statements.

With Team Obama’s social engineers and legal fixers steering the federal gravy train, the light at the end of the spending tunnel seems grimly dim.