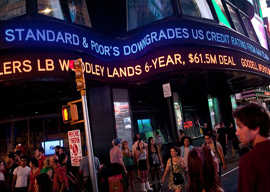 The decision by Standard & Poor’s to strip the United States of its AAA credit rating, for the first time, has triggered a barrage of catcalls against the umpire from the press box and Obamaites.

S&P, we are reminded, was giving A ratings to banks like Lehman Brothers, whose books were stuffed with suspect subprime paper, right up to the day Lehman Brothers fell over dead.

Moreover, S&P made a $2 trillion error in its assessment of U.S. debt and used political criteria in making its downgrade.

All of which may be true. But none of which is relevant.

In the last year alone, the U.S. dollar has lost 30 percent of its value against the Swiss franc.

A Swiss citizen who exchanged francs for $100,000 in dollars in June 2010 to buy one-year T-bills, then cashed those T-bills in this June, would have gotten back $100,000 in U.S. dollars. But those dollars would now be worth 30 percent less in Swiss francs.

On “Meet the Press,” Alan Greenspan insisted that the United States is not going to default. Why not? Because our debt is denominated in dollars, and we can print dollars to pay off our creditors. Which is pretty much what Chairman Ben Bernanke and the Fed have been doing.

“This downgrade is deeply deserved.”

With the dollar down 5 to 10 percent this year alone against the world’s more respected currencies, we are engaged in what the Romans called coin-clipping—official stealing from citizens and foreigners.

Why are the Chinese so upset?

Because they are sitting on more than $1 trillion in U.S. bonds and Treasury bills bought with dollars we paid them for Chinese-made goods, while the purchasing power of the dollars that those bonds and T-bills represent withers away every week.

“I believe this is, without question, the ‘Tea Party downgrade,’” says Sen. John Kerry.

How so? Because the Tea Party blocked the big deal President Obama sought to cut with House Speaker John Boehner to resolve the deficit-debt crisis.