Whose Arson Is Preferable? 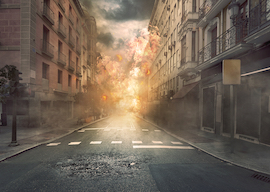 “The Machine Stops” is a story by E.M. Forster published in 1909, the year of my father’s birth. Forster is not usually considered a writer of science fiction, any more than is Jane Austen, but his one attempt at the genre was truly remarkable.

In the story, humans lead completely isolated lives in underground cells. They communicate not directly but electronically. Face-to-face contact is regarded by them with fear, distaste, and even disgust. Their every wish is attended to by a giant supply mechanism of whose working they know little or nothing but upon which they are completely dependent. Then the machine begins to break down, and the subterranean inhabitants are as helpless as maggots in a fisherman’s tin.

I don’t think I need to draw the obvious analogy with our own way of life. Young people cannot envisage their existence without recourse to the antisocial media, and even I find it difficult to remember how you bought a plane ticket before the existence of the internet, or how you arranged a rendezvous before the existence of mobile telephones. Our dependence on electronic communication may not yet be quite as complete as that of humans on the machine in “The Machine Stops,” yet it is already great and growing greater.

Last week, someone in la France profonde where I live some of the time sabotaged the local pylon that distributes within a considerable radius whatever rays or waves that are necessary for the internet and mobile telephones to work. I am not so attached to electronic communication that I am a person who spends his time texting from, or looking things up or playing games on, his phone while in a restaurant with others (who are all doing the same); nevertheless, I felt pretty bereft, even almost vulnerable. Though at my age I rarely receive messages that are important even to myself, and never any that are important to the world or to humanity as a whole, I began to imagine that I was missing messages that were of vital significance, for example opportunities of a lifetime that had to be seized within a short time of receipt of the message. The fact that I could not formulate with any exactitude what such an opportunity might be, never in my life having received such a message, did not in the least allay my undercurrent of anxiety, which did not decrease during the three days or more it took for “them” (whoever they were) to restore the service.

“Is arson directed at no one in particular morally worse or better that that which is directed against chosen targets for a discernible reason?”

There has been a little epidemic recently in sabotage in my obscure area of France. It has been very dry and hot, and four forest fires have been started locally in quite quick succession. The vast majority of such fires around the world are arson rather than spontaneous combustion or even accident, and it is certain that these four fires were started by a pyromaniac. They were put out with admirable promptness and efficiency by the fire services and did not extend more than a few acres, killing no one and damaging no property. But not far from me—so I feel—is someone who is plotting his next fire, which might engulf me. This person, whoever he is, has nothing personally against me; he is actuated by motiveless malignity, or by self-dramatization, or perhaps by an aesthetic appreciation of flames in themselves. As for the destroyer of the communications tower or pylon, he may of course have some ideological grudge against the conditions of modern life, or he may simply enjoy the prospect of causing inconvenience to thousands of people by a fairly simple expedient (they were angry afterwards, as if deprived of a fundamental human right, not against him but against the authorities that failed to restore communications immediately after they were broken).

Now arson in England has a different quality from that in France. The English are a pragmatic people, and they burn down buildings either for the insurance money or so that they are damaged beyond repair and hence receive local government permission to build something larger and more profitable in their place. They don’t care in the slightest whether the building is a beautiful or historic one, or whether what replaces it is hideous and cheap and nasty (as it usually is). The general procedure is as follows: An existing building is allowed by its owner or owners to fall into terrible disrepair, such as to render it nearly uninhabitable or unusable, and then it is struck mysteriously by a fire that puts it beyond all hope of restoration. Having become a public hazard, it is demolished, and the property developer behind the whole scheme then has his opportunity, ably assisted by English architects, to scar the landscape with a gimcrack but profitable construction.

I have known a few professional arsonists. They do what they call “insurance jobs.” They are careful not to endanger life, either because they have the remnant of a conscience or because they know that arson that endangers life is a more serious charge, in the unlikely event of their being caught, than that which does not and thus carries a shorter prison sentence. Who says that punishment does not deter?

The only other kind of English arsonist is the jealous spurned lover, usually the stepfather of several children, who wants to take revenge on the woman who has just thrown him over for another appalling man, and who pours fuel through the letter box and then sets fire to it. Sometimes the fire can be put out quickly, but on other occasions it spreads through the house and kills one or all of the residents, including small children.

Which kind of arson is preferable, the French or the English? I think this would be an interesting question for university students of moral philosophy. Is arson directed at no one in particular morally worse or better that that which is directed against chosen targets for a discernible reason? Does the bravery of the professional arsonist (it takes planning, foresight, and courage to burn down a building to do a successful insurance job) make him a better person than he who acts merely from a desire to make a difference, as the cant phrase has it, and acts without courage? For myself, I keep an open mind on this difficult question.