Whose Job Is It to Kill ISIS? 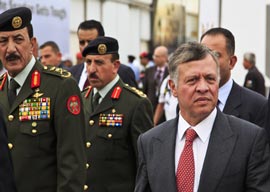 Seeing clips of that 22-minute video of the immolation of the Jordanian pilot, one wonders: Who would be drawn to the cause of these barbarians who perpetrated such an atrocity?

While the video might firm up the faith of fanatics, would it not evoke rage and revulsion across the Islamic world? After all, this was a Sunni Muslim, in a cage, being burned alive.

As of now, this cruel killing seems to have backfired. Jordan is uniting behind King Abdullah’s determination to exact “earth-shattering” retribution.

Which raises again the questions: Why did ISIS do it? What did they hope to gain? Evil though they may be, they are not stupid.

Surely, they knew the reaction they would get?

First, ISIS is hurting. It lost the battle for Kobane on the Turkish border to the Kurds; it is bleeding under U.S. air attacks; and it is stymied in Iraq. It wanted to lash out in the most dramatic and horrific way.

Second, ISIS wants to retain the title of the most resolute and ruthless of the Islamist radicals, a title temporarily lost to al-Qaida, which carried out the Charlie Hebdo massacre in Paris. This horror has put ISIS back in the headlines and on global television.

Third, ISIS wants to pay back King Abdullah, a Sunni and descendant of the Prophet, for joining America in bombing them.

Fourth, this may have been a provocation to cause the king to put his monarchy on the line and plunge Jordan into all out war against the Islamic State.

For history teaches that wars often prove fatal to monarchies. In the Great War of 1914-1918, the Hapsburgs and Hohenzollerns, the Romanovs and Ottomans, all went down.

The terrorists of ISIS may believe that stampeding Abdullah into fighting on the side of the “Crusaders” may prove destabilizing to his country and imperil the Hashemite throne.

For, though Jordanians may be united today, will they support sending their sons into battle as allies of the Americans and de facto allies of Bashar Assad, Hezbollah, and Iran?

There are reasons why Sunni nations like Turkey and Saudi Arabia and the Gulf states have not committed more openly and decisively to the war on ISIS, and instead prod the Americans to send their troops to eradicate the Islamic State.

To many Sunni nations, Assad and the Shia Crescent of Tehran, Baghdad, Damascus and Beirut are the greater threat. Indeed, until recently, as Joe Biden pointed out last October, the Turks, Saudis and United Arab Emirates were providing clandestine aid to ISIS.

Biden was forced to apologize, but he had told the truth.

Which bring us back to the crucial issue here. While King Abdullah is a trusted friend, Jordan has been best able to serve its own and America’s interests by staying out of wars.

Lest we forget, Abdullah’s father, King Hussein, refused to join the coalition of Desert Storm that drove the Iraqi army out of Kuwait.

In February 1991, President Bush charged that King Hussein seems “to have moved over, way over, into the Saddam Hussein camp.” In March of 1991, the Senate voted to end all military and economic aid to Jordan. But the king was looking out for his own survival, and rightly so.