Why We Must Teach Toxic Masculinity in Schools 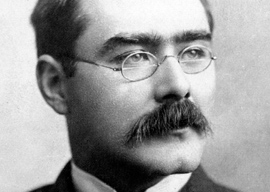 In mid-July, while Donald Trump’s visit was upsetting thousands of easily offended (and, one suspects, eagerly offended) Londoners, a small band of “student activists” were in their canteen at Manchester University, painting over what they had deemed an offensive mural. It displayed Rudyard Kipling’s poem “If,” and those of a delicate disposition should look away now:

If you can meet with Triumph and Disaster
And treat those two impostors just the same;

It is understandable that a call for fortitude could irk student activists, who, as defenders of the vulnerable, need a steady supply of vulnerable and defenseless subjects, while Kipling’s final clause, “You’ll be a Man, my son,” might make some feel misgendered over their muesli, but one wonders why they bothered. If they feared a wave of un-PC maturity sweeping the U.K., they need only have glanced at footage of the London protests and the 20-foot-high inflatable U.S. president raised by their comrades in Parliament Square.

The protesters were doubtless further soothed by the reaction from the traditional* media, which duly provided maximum attention with minimum scrutiny. The BBC quoted the Student Union’s “liberation and access officer,” saying the writer’s work was “racist,” but neglected to mention that Kipling’s Kim was a favorite novel of Jawaharlal Nehru, India’s first prime minister. Meanwhile, The Washington Post fawned over “the Brains Behind the Blimp.” Leo Murray, 41, who “runs a climate change charity,” said: “To people who are saying this is a childish and offensive protest…Donald Trump is a childish and offensive President so this is an appropriate form of protest.” By this logic, were Mr. Murray an anti-racist and anti-nukes activist, he would consider lynching black people under a mushroom cloud to be an “appropriate form of protest.”

These episodes followed a similar orgy of outrage in the second half of June, also aimed at Donald Trump, but triggered by what the latter calls “fake news”: the photograph of the distressed Honduran girl whom Time magazine and others incorrectly claimed to have been dragged away from her parents at the border. In fact, since 2015, when the possibility of President Trump (and in Europe, Brexit) appeared on the horizon, the establishment has repeatedly bombarded the public with howls of official disapproval, like the whining of Katyusha rockets headed for the Sixth Army at Stalingrad. The values lauded by Kipling—fortitude, restraint, maturity, manhood—now seem as antiquated as factual reporting.

Which brings us to May of this year and the curious proposal, submitted by University of Wisconsin-Whitewater professor Kathleen Elliott, that America’s elementary schools “implement programs to fight toxic masculinity.” At this point, I should confess my heresy: I don’t believe in Toxic Masculinity. As one who spent most of the past decade living in Russia and scribbling about sport, I was probably one of the last to encounter this strange phrase, but became intrigued when I noticed it was frequently and venomously directed at someone called Jordan Peterson.** I assumed this savage brute must—at the very least—have robbed a bank with a bitten-off shotgun, escaped in a stolen Spitfire, and impregnated half a convent, so I was a little disappointed to discover a mild-mannered philosophy professor armed with little more than traditional views on pronouns.

Further investigation informed me that “All Masculinity Is Toxic” and “Toxic Masculinity Harms the Environment Too,” and now Professor Elliott feels we should conscript the West’s children to fight this abstract concept, “in light of media representations that promote aspects of toxic masculinity such as physical strength, dominance, and heterosexual prowess.” Taking each casus belli in turn, it is hard not to sympathize with the educators tasked with teaching this to their streetwise and media-savvy classes.

Firstly, the world is still applauding the “physical strength” of the divers who rescued the Thai football team trapped in their flooded cave. As for (male) “dominance,” we’ll cut Ms. Elliott some slack—she could not have foreseen last week’s bizarre spectacle in which CNN’s Jim Acosta, his voice cracking with emotion, beseeched and pleaded the White House press secretary, Sarah Sanders, to agree that “the media is not the enemy of the people.” The words he begged for remained unsaid, and any talk of masculinity in the U.S. media must be banished until further notice. Finally, it is “heterosexual prowess” that saves the human race from extinction. All of the above will invite justified derision.

Moreover, schools are hardly excelling at teaching the basics: Harvard claims that “only 32% of students leave high school academically prepared for college” (for black and Hispanic students, 20% and 16%, respectively) and “These staggeringly figures [sic] are especially disconcerting, because these students are likely to need remediation in college…than [sic] classmates who enter with higher levels of skill.” It is no mystery that two-thirds of children are underperforming when a “Master of Education” at Harvard produces two glaring grammatical mistakes in a single sentence, yet Ms. Elliott wants this system to take on Toxic Masculinity.

Should we fight this? No, we should encourage it. As Napoleon Bonaparte said before Austerlitz, “When the enemy is making a false movement, we must take good care not to interrupt him.”

But what of the children who would have to endure such lessons? In order to progress, they would have to feign interest in the tedious and belief in the ridiculous; to give courteous replies to idiotic questions; and to keep their tempers in check through long, wasted hours.

In other words, ideal training for real life. They might even turn to Kipling for inspiration.

*Frequently called the “mainstream media,” but I fear this is rather like calling the Hindenburg a “mainstream airship.”